At the 2022 Makina Moto Show, CFMOTO Philippines, distributed by Motostrada, unveiled and launched its newest sportbike, the 450SR. The bigger brother to the 300SR, the new model comes with a larger engine than its smaller SR brethren, which makes it the first expressway-legal sportbike in the country. 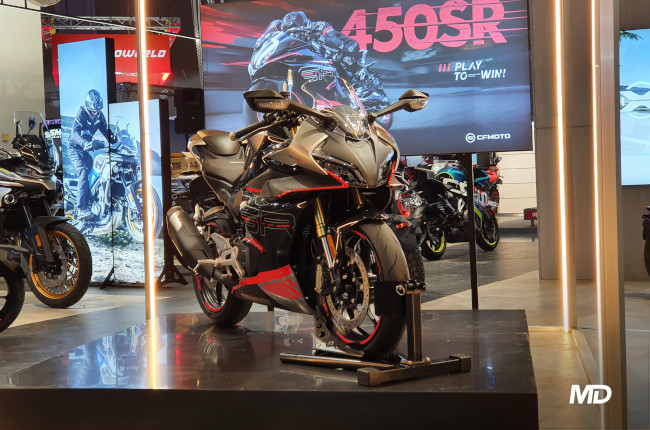 While the 300SR comes with a DOHC, liquid-cooled, single-cylinder engine mated to a six-speed transmission, the 450SR doubles the cylinder count and introduces the brand’s second-ever 270-degree crank engine (second only to the 800MT adventure bike). Other than that, the model is also an expansion to the SR lineup in the country, which previously only saw the 300SR all alone and leading the charge. Now that the 450SR is here, however, there is another sportbike that will help the SR name gain dominance in the realm of sportbikes. As for the size of the bike, it's still compact coming in at 1,990mm long, 735mm wide, and 1,130mm tall. It sits on a 1,370mm wheelbase and its seat height is still at an approachable 795mm. The 450SR’s ground clearance comes in at 140mm. As for its weight, it tips the scales at just 168 kg, making it a lightweight motorcycle in its segment. Going back to the engine, it features a displacement of 450ccs and a power output of 49.6 hp. Torque is at a sizeable 39 Nm and it’s mated to a six-speed manual transmission. Like the 300SR, the 450SR will come with a 5-inch TFT gauge cluster with a speedometer, tachometer, trip meter, fuel meter, and temperature display among other standard features. The engine gets its fuel from a 14-liter fuel tank which should be enough to get it at least 300 kilometers of range on a single top-up. As for its price, the CFMOTO 450SR bears a P299,900 price tag and it comes in two colors, Nebula-Black and Zircon-Black. It will be available for purchase today, and if you have the time, you can check it out in person at the Makina Moto Show at the SMX Convention Center this weekend.