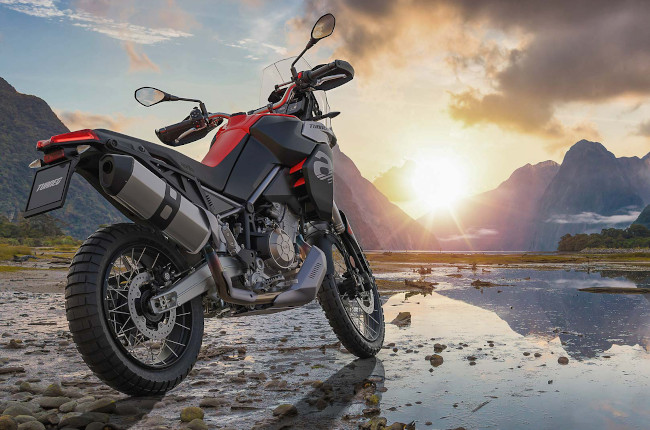 There has been a considerable amount of hype surrounding the middleweight ADV segment in recent months. Not only did Yamaha drop a bombshell of a motorcycle with the Tenere 700, so, too, did Aprilia, when it announced that it would be launching the new Tuareg 660, an adventure bike based on the highly successful RS 660 sportbike platform. The Noale-based company has been very vocal about the new bike, dropping multiple teasers left and right. Naturally, this opened doors to a lot of speculation.

Now, Aprilia has officially revealed more details about this adventure bike, specifically, when it’ll launch in the global market, as well as its retail price, particularly in the US market. Before we jump into that, though, let’s first take a look at this bike’s performance. It’s been confirmed that the bike will sport the 660cc, liquid-cooled, DOHC, parallel-twin motor we find in the RS 660. For the Tuareg, however, power output has been detuned slightly to 80 horsepower, to favor a punchier bottom to mid range, which is ideal for off-road duty. What’s more is that the Tuareg 660 will come equipped with an adjustable 43mm inverted fork, and a rear monoshock with a progrssive linkage system. The bike’s long-travel suspension affords it a ground clearance of 9.5 inches, with a rather approachable unloaded seat height of 33.9 inches. From a tech perspective, it’s been confirmed that the bike will sport some upmarket features such as full-LED lighting, and Aprilia’s proprietary Performance Ride Control (APRC). This means that the bike features customizable settings such as traction control, ride modes, engine braking settings, and even cruise control. All these systems and more can be accessed and configured via the bike’s 5.5-inch full-color TFT display. Aprilia will be launching the Tuareg 660 in three color options—all of which are inspired by the Italian manufacturer’s modern-day racing liveries. Similar to the RS 660 and Tuono 660 street bikes, the Tuareg 660 will feature similar graphics and color palettes, giving it a very distinctly Aprilia aesthetic.

Deliveries of the Tuareg 660 are expected to commence in the Northern Hemisphere by February 2022. Specific to the US market, the Tuareg 660 has been pegged at $11,999, or the equivalent of P600,000 for the standard colors, and $12,599, or P630,000 for the premium Indaco Tagelmust finish. Expect this bike, however, to be way more expensive when it hits the Philippine market, presumably in the first half of 2022. For reference, the RS 660 sportbike retails at P860,000, so expect the Tuareg 660 to be just a tad pricier than the sportbike.