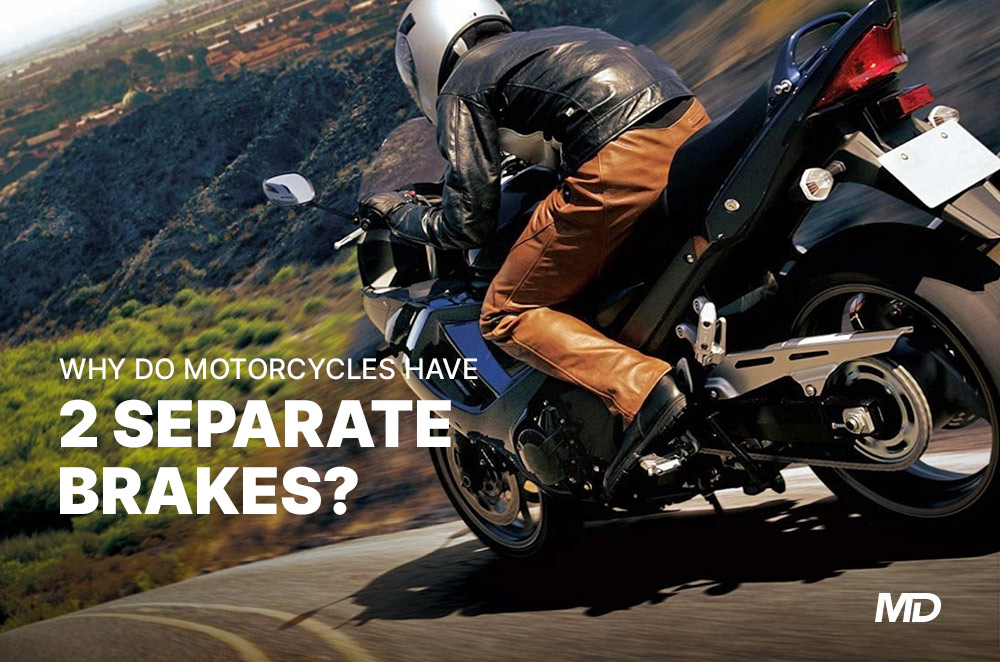 For many beginner riders, braking is one of the more difficult skills to learn and master. The fact that most motorcycles are equipped with independent front and rear brakes can be overwhelming for some, especially in practice, but it doesn't have to be that way.

Learning about how each brake works can give you a better grip on your bike—figuratively and literally. Whether you ride a sportbike, touring bike, or any other type of bike, it’s worth taking a look at why motorcycles have two separate brakes.

It's required by law in many countries

In many countries, including the United States, there's a law on motorcycles that mandates at least two separate service brake systems or a split-service brake system. The Federal Motor Vehicle Safety Standards require at least one brake operating the front wheel and one brake controlling the rear wheel.

As an influential country, motoring laws in the US carry a lot of weight. Manufacturers consider policies like this one when designing and engineering their motorcycles. Companies also want to save money by standardizing their model lineup across different markets. So, keeping their braking systems uniform could be a top priority.

Ultimately, this could be one reason why motorcycles have independent brakes, even in countries that do not require them, including the Philippines.

It's the best way to stop a motorcycle While legislation is undoubtedly a good thing, we need to look at what spurred it in the first place. Simply put, separate front and rear brakes for motorcycles are required by law in the US because they're effective and save lives.

Balance is a delicate thing on a motorcycle. Having a single brake doesn't offer the level of control needed to stay upright on two wheels. On the other hand, separate front and rear brakes give a rider full control over each wheel's stopping power.

How to brake properly on a motorcycle Traction is highly important on a motorcycle, perhaps more so than on a car. While you can generally maneuver out of a skid, or traction loss on four wheels, this is much more difficult on a bike. Losing traction and skidding can result in a fatal crash for many riders.

This is where control comes in. Each riding situation varies and will call for a different mix of front and rear brake pressure. In general, the front brake provides around 70% of a bike's braking power, while the rear controls the remaining 30%.

When braking, the bike's weight shifts forward, loading up the front suspension in the process. This shift gives the front wheel more traction but causes the rear wheel to lose grip. The ability to change braking pressure on either the front or rear brake is vital to keep the rider balanced when coming to a stop.

What are combination brake systems?

More and more motorcycles these days come with combination brake systems (CBS). This system links the front and rear brakes so that one engages when you press the other. For example, in some Honda scooters like the PCX 160, engaging the rear brake lever also activates the front brake. The CBS system applies the necessary stopping power to both wheels to ensure safe braking. It may also lead to having better control and a shorter braking distance for the bike.

Motorcycles need two separate brakes for total control over the front and rear wheel. Having independent brakes mean that the rider can avoid losing control of the bike in various riding conditions by applying the appropriate braking force on each wheel. By using proper braking procedures and defensive riding techniques, motorcyclists can enjoy a safe and quiet ride each time they get on the saddle.