Ever since the very first motorcycle came rolling out in the early 19th century coming out as repurposed bicycles with engines attached to their frames which drove the chain or belt to propel it forward, combustion engines needed to run on a mixture of two things in order to propel the motorcycle forward — air and fuel. By introducing the engine with the right amount of air-fuel mixture, together with a precisely-timed ignition spark, the piston slides down the bore, turns the shaft, and converts chemical energy into kinetic energy and expels the spent gasses thereafter. Over the years, a lot of changes may have been made to the very first engines that motorcycles used, but traditionally, they can still be divided into two types, four-stroke, and two-stroke engines.

However, in this day and age, two-stroke engines are no longer as common as they used to be because they were notorious for their emissions and would no longer bode well with today’s current standards. Four-stroke engines, on the other hand, are still very common even in today’s modern machines. Yet, they still operate on generating power through a series of events called the four-stroke cycle occurring on the engine’s cylinders thousands of times a minute namely, intake, compression, combustion, and exhaust. If you want to better remember this process, think of the enthusiasts’ favorite terms, suck-squeeze-bang-blow. During intake, the inlet valve opens upon which air enters through the filter and intake tubes while the piston moves down which vacuums the air-fuel mixture into the cylinder through the engine’s inlet and fuelling system. 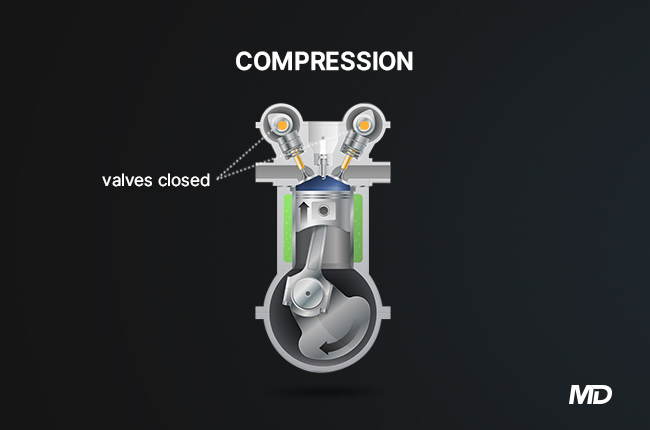 After the full intake stroke, the piston then enters the compression stroke, squeezing the air and fuel mixture near the valves and spark plug and creating a dense charge of air and fuel that is just waiting for a spark to expand it. That leads us to our next step. 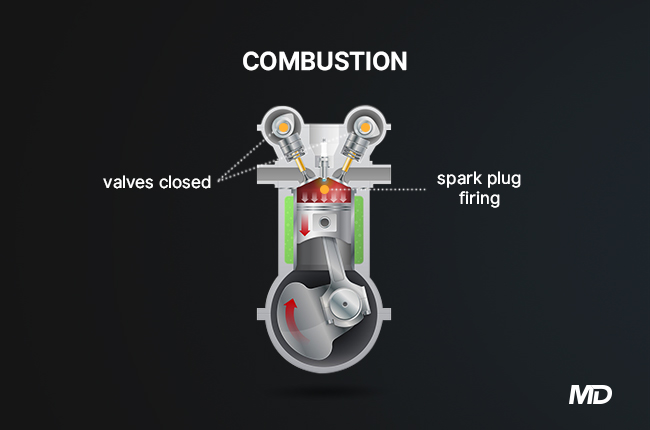 As the piston nears the top of its stroke, the sparkplug fires and ignites the air-fuel mixture. The charge expands which would force the piston down the cylinder again.