We’ve all seen the YouTube videos. Motorcyclists in other countries versus drivers. If you’ve only watched this kind of content, then it really paints the picture that the cagers really are out to get motorcyclists. Being on a motorcycle is already risky business. What about when a car or yet another biker is acting weirdly around you or cuts you off? Shouldn’t that require a response?

Well, yes and no. It doesn’t matter if you’re on a big boy cruiser, or if you’re on an adventure bike with lights all around. There are certain things that you just simply do not risk on a motorcycle, and there are certain things that you must never do and keep under control even if the situation truly is infuriating. Road rage is a number one no-no on the road and especially on a bike. Let’s dive into a little more detail about this rather fascinating topic.

Make sure that you have the proper gear all the time before you ride. However, there are a few more pieces that you can add to your inventory, not just your helmet, pants, jacket, gloves, and boots. Consider equipping yourself with an action camera or a dashboard camera so you can keep track of what is happening around you, and perhaps report and log some near misses or actual accidents.

Not only does a camera help your case if ever something happens to you, but it’ll also help your case if you try and file some insurance claims, and find out who was in the wrong. It also works as a bit of a deterrent. If someone is making bold moves near you, simply point to the camera, and they may even back off in fear of becoming the next big hit on the internet.

Stay on the bike As much as possible, if someone cuts you off or does something risky in front of you, keep calm, stay on the bike and move on. Don’t let the actions of others deter you from having a good time, and try not to be fazed if they’re getting on your nerves. Remain as calm and collected as you can be.

If they happen to make contact, try your best to stay on the bike, or brace yourself for the fall.

Whatever you do, even if you are literally up to your ears in anger, never, ever retaliate against another motorist while on a motorcycle. This is pretty clear-cut, if you get mad, you’re definitely getting into some trouble or end up being the trouble on the road.

Try some breathing exercises to calm your nerves, count to ten, have a routine in mind to remain absolutely calm on a motorcycle. 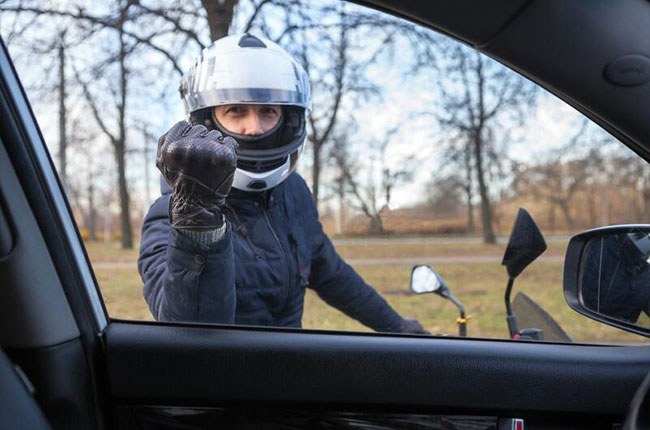 If there is someone that is getting on your nerves on the road, let them be and avoid them entirely. That means that you either get out of their way, or you slow down and let them carry on. Judge what they will do next and do the opposite. If they’re running slowly, speed up a little and keep your distance. If they’re going quick, slow down and breathe. Let them go ahead of you.

That’s why it sometimes pays to have a faster bike. Smaller bikes and city scooters may or may not have enough power to get away from a car, so perhaps also take that into consideration if you’re trying to get away from a potential road hazard or someone that is pushing your buttons.

Just ignore them and shake it off

Don’t get too caught up in someone else’s mistake. Remember that you’re out for a ride, and not on the job enforcing what you think is right. After you make your getaway, don’t linger around and try to get them at the next stop. Instead, carry on.

Shake your head, don't make any untoward hand gestures. Make sure that you're as composed as can be. Unlike a car, you don't get the same level of privacy, and every little action that you make is on display for the whole world to see. The most you can do could be to just shake your head, keep your hands on the bars, and don't look back at the erring motorist.

Few pounds of meat against a ton of steel? You have physics set squarely up against you when you road rage against a car. Sure, you see motorcyclists mirror slap cars all the time for being reckless on the road, cursing them and calling them profanities and what not. Think about it this way, however, what if that driver snaps as well and decides to turn into a wrecking ball? You and your motorcycle will be in for a bad time.

Think about the consequences. What if you rage against a car and they retaliate in self-defense? That’s a recipe for a bad time. Not only will you be knocked off your vehicle, but you will also damage it and the car, not to mention the potential for injury.