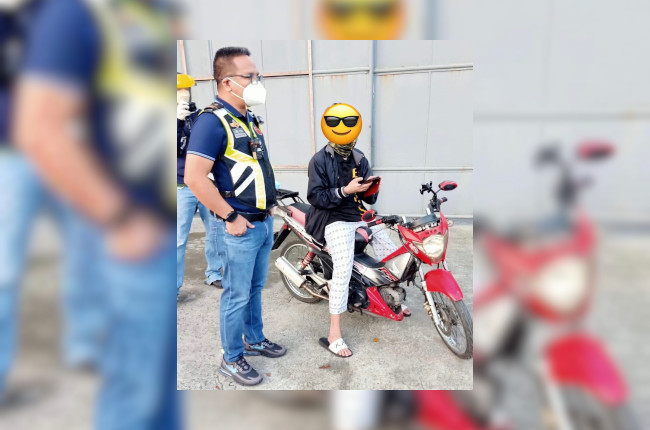 Picture this, you’re riding on a congested city street, stuck in rush hour traffic. All of a sudden you take a glance to your right. A spacious sidewalk with hardly any pedestrians beckons you to get on and use it as an expressway through traffic. You position yourself to get on top of it. You look as far ahead as possible judging whether or not there are any hazards, or worse, traffic enforcers ready to pounce at you for your illegal act. With no threats in sight, you hop onto the curb, and zoom your way past traffic.

Yes, this sounds very convenient, and unfortunately, it’s a reality we are well too acquainted with. There are indeed so many kamote riders out there that seem to have no logic with regards to what’s right or wrong. All they care about is to get to where they need to go as quickly as possible and without regard for their own safety, and the safety of others. That being said, the temptation to take the easy way out is indeed very strong, but traffic rules and regulations are in place in order to keep us and the people around us safe. Next time you feel the urge to hop on the curb, you’ll be better equipped to fight the temptation. Here’s why it’s totally unsafe and outright illegal to ride your motorcycle on the sidewalk.

Be sure to always wear a facemask while riding your motorcycle Sidewalks, as the name suggests, are meant for walking. That being said, pedestrians hardly ever expect to see a raging hunk of metal charging towards them in their safe space at the side of the road. Just a couple of days ago, MMDA Traffic Chairman, Bong Nebrija, apprehended a motorcycle rider using the sidewalk as his own personal expressway. What he discovered turned out to be a rabbit’s hole of violations. As it would turn out, the rider wasn’t wearing a helmet, and was also in improper attire, as he was wearing slippers. To make things worse, he didn’t even have a driver’s license. This paints a picture of the kind of person that would commit such a violation. Perhaps out of sheer ignorance, this rider thought that it was perfectly legal to ride a motorcycle without a license, without a helmet, and with slippers on the sidewalk. Now, in general, an educated motorcyclist who has a valid drivers license, and who took a basic riding course would know better than to ride on the sidewalk. That said, we’re pretty sure that our avid readers would never engage in such malpractice. However, for those of you who are curious, what exactly could be the consequences for such a violation? Well, in the case of that dude Bong Nebrija caught riding on the sidewalk, for starters, riding on the sidewalk could be charged under reckless driving, which carries a P2,000 penalty. To add to this, the apprehending enforcer could even slap an additional charge of obstruction, which comes with a P150 fee.

In the case of our erring sidewalk rider though, he had a slew of other violations under his belt. For instance, the no-helmet offense will set him back a steep P1,500, while improper attire for riding in slippers can be fined up to P500. Since he wasn’t able to present any registration documents for his motorcycle, he may need to shell out an additional P1,000, as well as yet another P2,000 impounding fee. Subsequently, he could be charged with operating an unregistered motor vehicle, which comes with the heaviest fine of P10,000. Lastly, since he didn’t have a driver's license, he could be slapped with an additional P3,000 penalty. All in all, his compounded violations could set him back well over P20,000—more than what the average employee earns in a month.

So there you have it folks. Think twice before you choose to disobey traffic rules and regulations. Let’s stop the mentality of thinking that rules are there to restrict us, or to hinder our freedom. No, rules are there to keep us and the people around us safe, as well as to maintain a sense of peace and order.