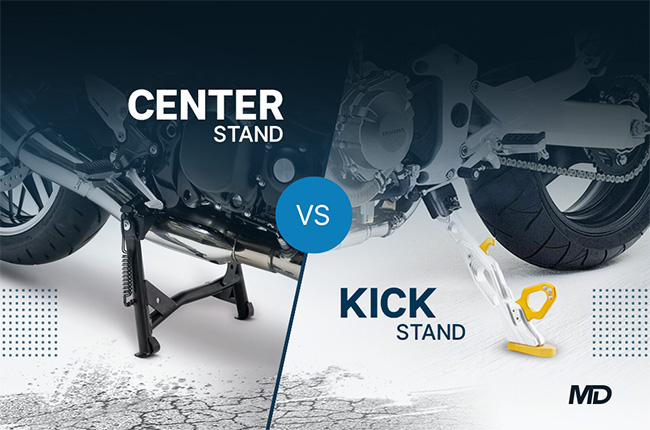 When you’re riding something with two wheels such as a motorcycle, one of the things you have to live with is that these machines are not capable of standing upright by themselves. Not only will it damage a bike if it is left to lay on its side, it can also cause damage to the engine. Case in point, you don’t want to drop a BMW with a boxer like the R nine T. So a stand is installed so the bike can stand on its own while parked. However, between a kickstand (side stand) or center stand, which should be better to use?

Kickstands or side stands Easy to deploy, lighter, more stable depending on the bike.

You can’t work on the bike because the wheels are planted. Unstable on soft surfaces. Can tip over on the opposite side.

With the exception of some dedicated race or track machines, motorcycles would always come with a kickstand to keep it upright. It’s usually attached to the left side of the bike and acts more like a tripod, with the front and rear tires acting as contact points to the ground and the side stand planted to the ground as the third contact point.

Ever since the motorcycle was invented at the beginning of the 20th century, the design of a motorcycle’s side stand remained the same which functioned by pivoting at one end and angled in such a way that it would be neatly tucked out of the way when raised, and swung down when needed and kept in place by a spring attached to it. Compared to a center stand, you simply kick it out and lean the bike towards its angle until it makes contact with the ground. When making quick stops and parking in a jiffy, side stands are the quick and easy solution to prop up your bike.

However, one of the disadvantages of a kickstand or side stand is that they don’t really work well when put against unstable or soft surfaces like mud or sand. An aftermarket side stand foot enlarger could do the job of providing more stability when used on softer ground. Other people would even use a smashed up soda can in place of a foot enlarger to make it more stable. In addition, if you plan on doing some work on your bike, like lubing your chain, or dismantling your rear tire, having your bike resting on a side stand would make it much more challenging. Works better than side stands on soft surfaces. Allows you to work on the bike and remove the rear wheel. Takes most of the bike’s weight from its tires.

Harder to deploy. Narrower footprint makes it susceptible to tipping over, but both sides can resist tipping over. Engine oil is level on a center stand.

A center stand works as a pair of legs or brackets that flip straight downwards effectively lifting the rear wheel from the ground when deployed. It also has three points of contact to keep the motorcycle upright, but instead of utilizing both tires, the center stand’s legs act as the two points of contact with the bike’s front tire as the third.

Center stands are starting to become more uncommon nowadays especially for bigger high-performance motorcycles to save weight and increase its ground clearance. They have a narrower footprint compared to side stands making them more susceptible to tipping over the bike when deployed. However, unlike side stands, they work much better on unstable or soft ground surfaces.

They do however take a little more effort to deploy. To do so, you would have to step on the center stand while at the same time, slightly lifting the bike and pulling it back to flip the stand up. Center stands are ideal for long term storage as they keep most of the bike’s weight away from its tires. In addition, since the rear wheel is lifted from the ground, a center stand would give you the ideal setup when trying to do some work on your motorcycle such as chain lubrication or rear wheel disassembly. Also, center stands allow your engine’s oil to be perfectly level, unlike a side stand that tips the lubricant over to one side.

Lighter bikes like Vespas, also come equipped with center stands. It is more common to see center stands on lighter machines because deploying a center stand requires the user to lift the bike up while using the stands contact points as a pivot. This is another reason why heavier bikes like Adventure motorcycles, only come with side stands. 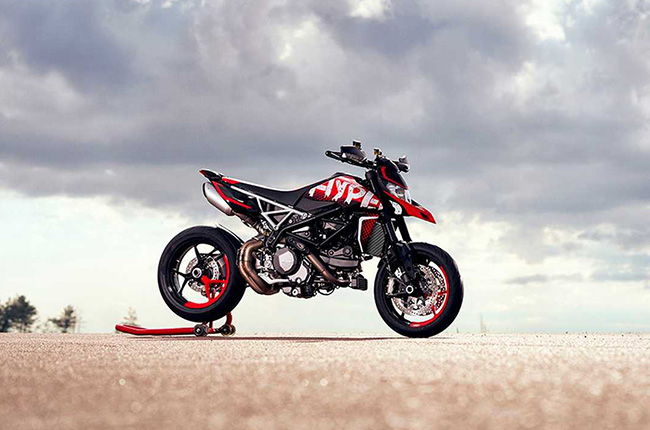 Nowadays, manufacturers don’t include center stands on motorcycles unlike most bikes back in the 70s and 80s when it was still standard for motorcycles to have them. However, side stands still do an excellent job and its ease of use makes it much more convenient especially if you’re in a hurry. Center stands are now more common with scooters, underbones, and other small-displacement motorcycles as it would make them easier to deploy with lighter motorcycles rather than bigger bikes. However, they still come as an aftermarket option for bigger bikes like the Kawasaki Z900 RS. Preference over which one to use would depend on the situation that would call for its use. Thus, if you plan to park your motorcycle for a long period of time, a center stand would be more appropriate to keep most of the motorcycle’s weight from its tires and if you’re off somewhere and you’re late for an important meeting, the ease of use of a kickstand would suit the situation more. It all depends on the use case of the motorcycle, but don’t let us stop you from getting both options. Also, if you want the benefit of a center stand, but don’t want to install a center-stand, consider a rear swingarm stand or a front fork stand to leave in the garage so you can either store or work on your bike without installing a cumbersome center stand.