For several years now, CFMOTO has dazzled and impressed the global motorcycle market with its nearly unbeatable value for money motorcycles. Somehow, the company has been able to produce motorcycles that boast impressive performance, excellent reliability, and original styling, all at a price tag that’s significantly lower than its Japanese and European rivals.

CFMOTO’s recent models, particularly the 700 CL-X range of retro-style bikes, have really elevated the brand’s image into one of premium and sophisticated features. However, it’s really the 800MT, the first fruit between CFMOTO’s and KTM’s collaboration, that really blows all the other bikes out of the water. On paper, the 800MT is about as premium of an adventure bike you can get, it’s equipped with all the fancy features you could ever ask for. Today, let’s take a closer look at the things that make the CFMOTO 800MT an unbeatable contender in terms of value. One of the biggest selling points of the CFMOTO 800MT is its engine. CFMOTO by no means kept it a secret that the 800MT shares an engine with the KTM 790 Duke. With 94 horsepower on tap, it’s more than capable of powering through all sorts of roads—including some lightweight trails, under the wing of a capable pilot. It makes use of a 799cc parallel-twin engine complete with a four-valve cylinder head, electronic fuel injection, and liquid cooling. CFMOTO has pulled out all the stops by partnering with KTM for the 800MT, and the bike’s performance certainly shows it.

CFMOTO pulls the covers off the 800MT in the Philippine market 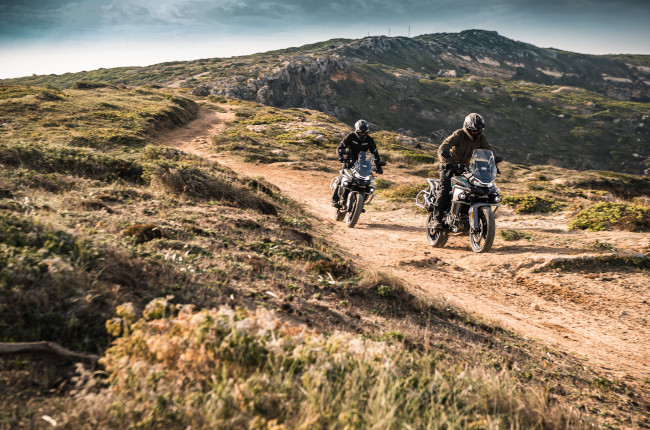 Being an adventure bike, it’s understood that the CFMOTO 800MT would be one of the most versatile motorcycles in CFMOTO’s lineup. Indeed, the 800MT has been tried and tested both locally and abroad, with a good number of these bikes participating and completing the recently concluded BOSS Ironman Motorcycle Challenge. On top of that, the bike’s relatively lightweight chassis and premium suspension truly go a long way in inspiring confidence, no matter the terrain. When it comes to styling, the CFMOTO 800MT employs unmistakable ADV aesthetics accentuated by its muscular bodywork, tall ground clearance, and menacing fascia. CFMOTO clearly put a lot of thought into the design of the bike, and it’s clear that the 800MT is simply a cut above the rest of its lineup. Everything from its LED daytime running lights, tall windscreen, and ergonomically designed chassis make it clear that the 800MT is serious about being a strong contender in the ADV game. When it comes to features, CFMOTO’s 800MT is a master class in adventure-focused amenities. Its electronics package alone is enough to make the Japanese and European middleweights green with envy. Speaking of which, the 800MT flaunts a fancy six-axis IMU, meaning it has to its disposal lean-sensitive traction control and ABS. Furthermore, all these features can be configured with a flip of a switch via an intuitive seven-inch full-color TFT instrument cluster. Of course, it gets premium underpinnings consisting of KYB adjustable suspension and J.Juan brakes. Perhaps the best part about the CFMOTO 800MT is its price tag. Retailing for just P515,000 for the Sport variant and P565,000 for the Touring variant, it undercuts the competition by a sizable margin, especially considering its level of performance and technological sophistication. It’s closest competitor, the Yamaha Ténéré 700, retails for P619,000, but pales in comparison when it comes to outright tech and engine performance. Needless to say, the 800MT is leagues beyond any other middleweight Japanese ADV, and punches well within the premium segment occupied by the likes of the BMW F 850 GS, KTM 790 Adventure, and Triumph Tiger 900.