When it comes to riding motorcycles, one important skill that is all too often taken for granted is mastering the art of low-speed maneuvers. This is even more evident in the world of big bikes, where the machines are heavier, often have a wider turning radius, and pack a lot more punch than small displacement motorcycles. That being said, piloting a big bike at low speed is significantly more challenging than puttering around on a scooter, and simple tasks like parking or making a tight turn in traffic could end with the bike on the ground, and a hefty repair bill on your tab. With that, here are 5 low-speed maneuvers you should master, no matter what bike you ride. The first essential low-speed maneuver that you need to practice is definitely the u-turn. When driving a car, making a u-turn is one of the easiest things you can do. However, when it comes to riding a motorcycle, the u-turn can be a rather tricky and daunting task to achieve, especially if your bike is on the heavier side of things. Not to mention, u-turns are present in almost all thoroughfares in the country. As such, you're bound to pass a u-turn either on your daily commute or on one of your weekend rides. The best way to get a feel for the bike's weight, as well as the way it balances this weight, would be to ride around in tight circles. When practicing this particular low-speed maneuver, make sure you do it either in an empty parking lot, or a private street with minimal traffic. It's normal to start with very wide circles, and for the bike to feel a little bit unsettled at first. However, with time and practice, you'll be tightening up your lines and the bike will begin to feel more relaxed. Try to counterweight the motorcycle by putting more weight on the outer peg, and shifting your weight upwards and away from the bike. 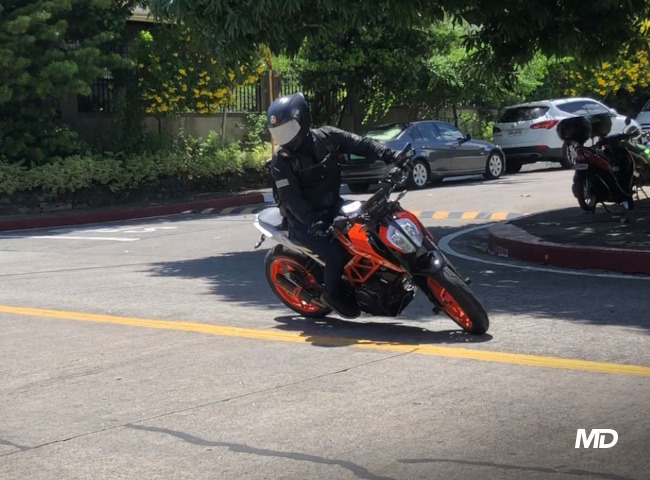 Once you're comfortable with riding around in tight circles, it's time to add some directional changes to this with figure 8's. Practicing this maneuver ensures that you as a rider, are able to handle the bike at low speed with sudden changes in direction. If you have a big enough space to practice on, considering switching your direction across various points in the circle. On top of getting a feel for the bike's weight and balance point, practicing figure 8's also improves your throttle and clutch control. A helpful tip when practicing this maneuver would be to slightly drag on the rear brake, as this gives the bike a little more stability making it easier to execute the move with finesse. Low speed slaloms involve changing directions in succession while moving at low speeds. Now practicing this is particularly beneficial in riding in urban environments with lots of road hazards and obstacles. We all know that Metro Manila doesn't exactly have the most flawless roads, as such it's important to be able to avoid a pothole, rock, or debris on the road without losing control of the bike. Doing low-speed slaloms also gives you a good idea of how the bike carries its weight, as well as the way this weight shifts upon changes in direction.

Tight turns from a stop Perhaps the most practical low-speed maneuver that you'll be using even on your first day of riding, would be a tight turn from a stop. This particular move is useful for everything from turning at an intersection, to leaving your driveway for work in the morning. Not only does it help you develop your ability to balance the bike at low speeds, it also improves your throttle and clutch control. Don't feel disheartened if you stall the bike a couple of times, or even drop it while practicing this maneuver. Just hop back on, and keep practicing.

As is the case with all things worth practicing, mastering the art of two-wheeled low-speed maneuvers doesn't happen overnight. It can take anywhere from days to weeks of practice until you feel confident in executing these moves without putting a foot down or being tensed up on the bike. Make sure to install some crash protection such as sliders, crash guards, and axle bobbins on your bike to minimize damage in the event of an accidental tip-over. Of course, don't skrimp out on gear, either. Yes, you may be practicing in the comfort of your home, away from traffic, but it's always best to take extra precautions when practicing low-speed maneuvers.