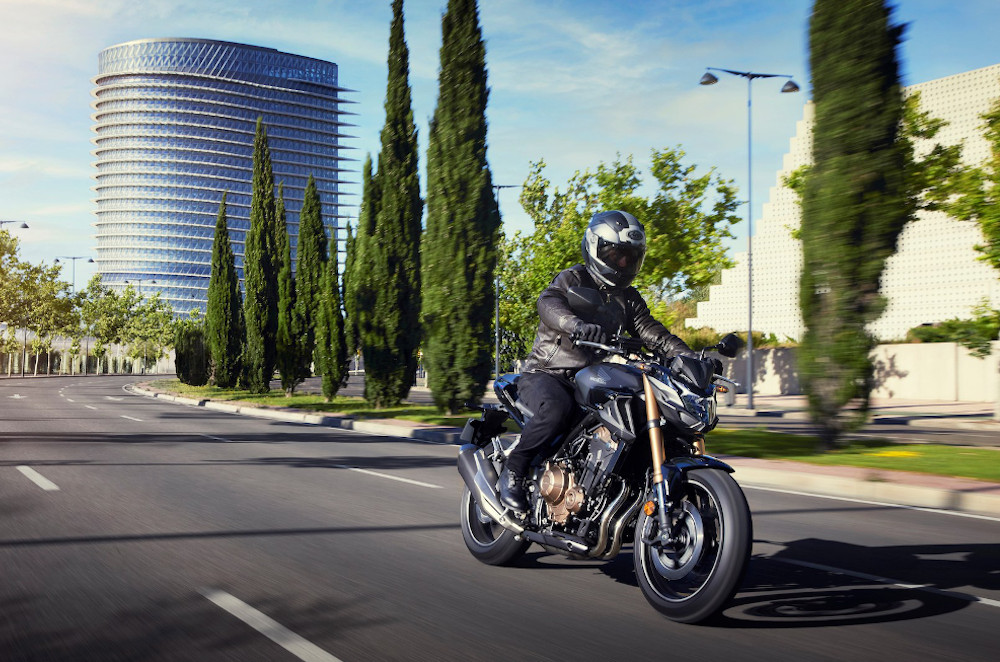 Choosing your first big bike is an exciting albeit challenging process. Today’s motorcycle is loaded with choices for those looking to access entry-level big bike performance, with nearly all major manufacturers offering models in the 400cc to 500cc range targeted specifically towards newbie riders.

Among the top players we have models like the CFMOTO 400 NK, KTM 390 Duke, and Kawasaki Z 400. In the local market, Honda just recently released its own naked streetfighter to go up against the entry-level big bikes from the other manufacturers—the CB500F. Based on the ever dependable CB500 platform, the CB500F employs unmistakable Honda styling, and a slight bump in displacement that could very well give it an advantage over its smaller displacement rivals. In terms of performance, many of you may already be familiar with Honda’s CB500 model range, in particular, the CB500X adventure bike and the CBR500R sportbike. The CB500F follows the same formula, but packages it in a more compact and city-focused platform with an emphasis on comfort and ease-of-use.

Having said all that, there’s really nothing new to expect from the CB500F in terms of performance, as it’s packing the ever dependable 471cc, liquid-cooled, fuel-injected, parallel-twin engine with an output of around 47 horsepower. In real-world applications, this translates to confidence-inspiring, albeit not frightening acceleration, and the ability to sustain highway speeds for prolonged durations. When it comes to dependability and reliability, it’s pretty hard to beat what Honda has to offer. The manufacturer is the biggest and most popular motorbike maker in the world precisely for this very reason, and the same is true across its entire model range—big or small. As such, the CB500F is pretty much unrivalled in the reliability department, and sits at the very top along side the other three major Japanese manufacturers. Honda’s CB500 platform has been in production for nearly two decades now, and so parts and maintenance items for the CB500F should be incredibly easy. Here at MotoDeal.com.ph, we’re staunch believers that naked bikes can make for some of the most versatile machines out there. Given the CB500F’s upright seating position, it’ll make for an ideal commuter be it in the city or on the highway. On top of that, it’s relatively easy to customize the bike’s ergonomics for a sportier or more relaxed riding position. The result is a motorcycle that can be outfitted as a daily commuter, long distance tourer, or canyon-carving sporty bike with just a few choice modifications. Given the fact that the Honda CB500F has the power and displacement edge when compared to its rivals, its slightly premium price tag of P354,000 is nevertheless a reasonable offer. The bike’s premium components including its Showa BPF Separate Function forks, preload adjustable rear suspension, dual front disc brakes, and LED lighting, all give the bike a premium feel, and make it both a perfect all-rounder big bike, as well as a solid option as a first-time big bike for newer riders.