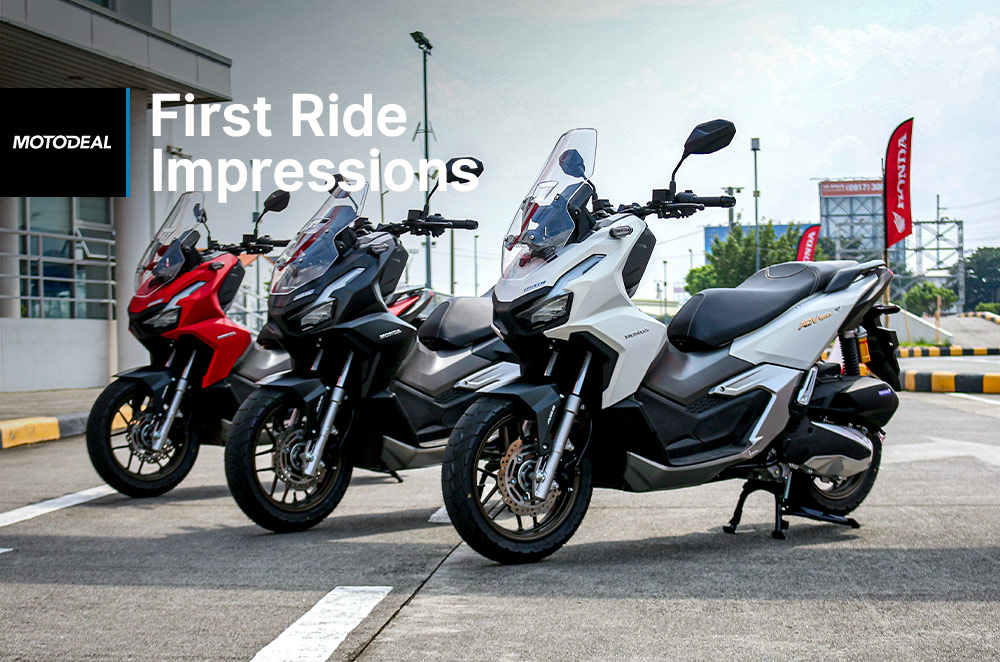 Honda has been on a roll recently, updating its lineup to include its all-new 160 series of scooters. It started with the PCX, Click, Airblade, and now finally the ADV 160. Perhaps the most hyped model in the automatic scooter lineup for the Philippines, the ADV 160 has a lot of fans that are just dying to see and try out this new model.

Whether you’re considering this bike as an upgrade to the outgoing ADV 150, or as a totally new-to-you scooter, let’s go over our first impressions of it on this first ride review. 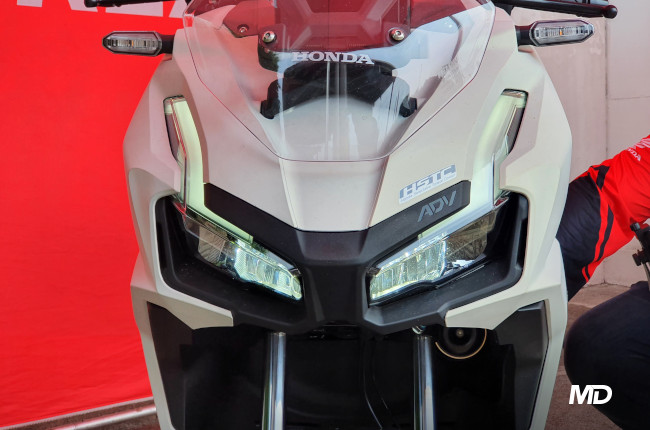 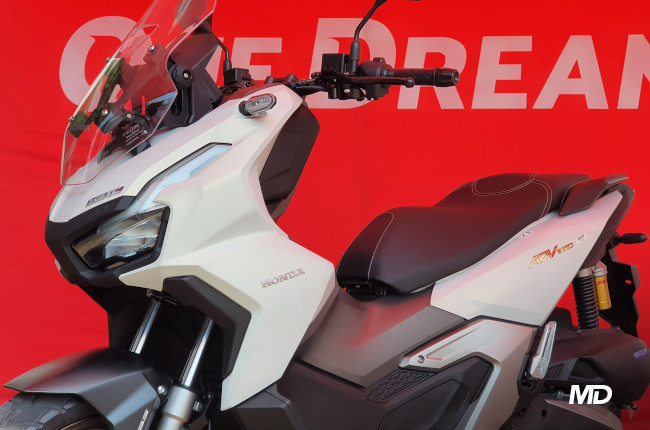 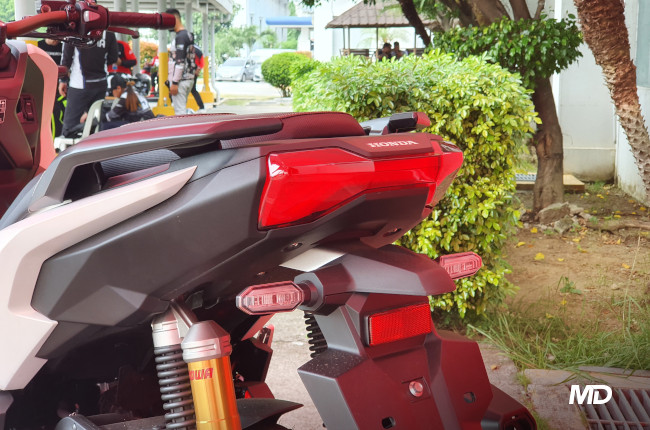 Walking up to the ADV 160, you will see that Honda has chosen to go for matte body colors this time around. The first ADV was offered in either a glossy or a matte finish, with the latter being regarded as “rugged-classy,” while the former being regarded as “futuristic.” Now, Honda has made the ADV into a rugged, classy, modern-looking scooter with matte finishes all over along with a clean no-decal look that is sure to catch attention while looking minimal at the same time. 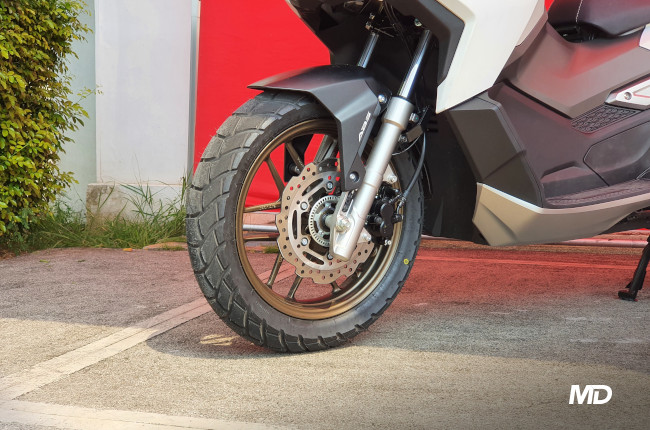 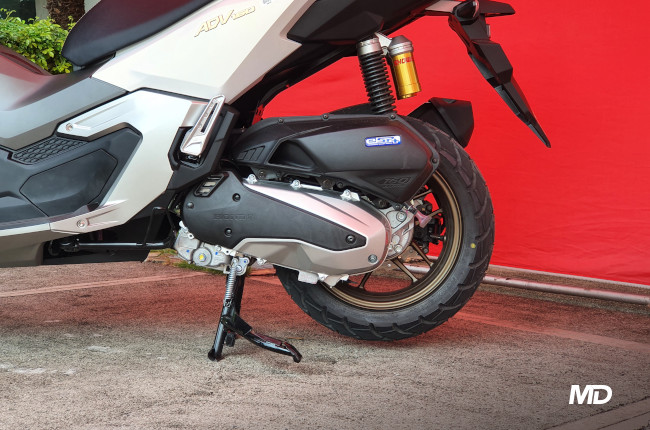 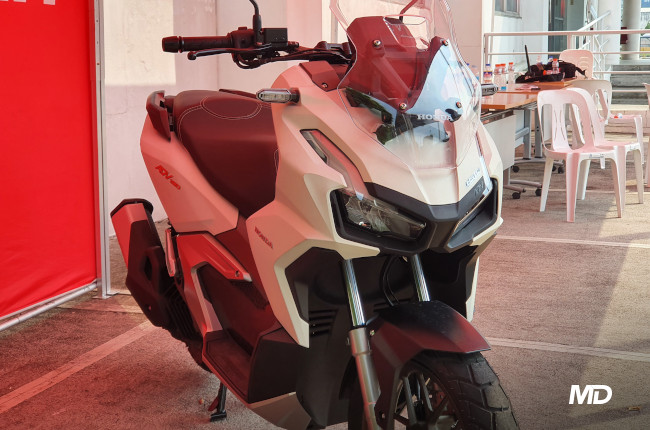 When asked why the ADV 160 was fitted with matte plastics, Honda Philippines stated that it was to incite interest in the new model as well as to appeal to customers who want a different look. Honda did a great job making the ADV look more modern, even if its look didn’t change all too much. The scooter did grow a little in terms of volume, but its overall dimensions are still close to the original measurements of the outgoing 150 model. 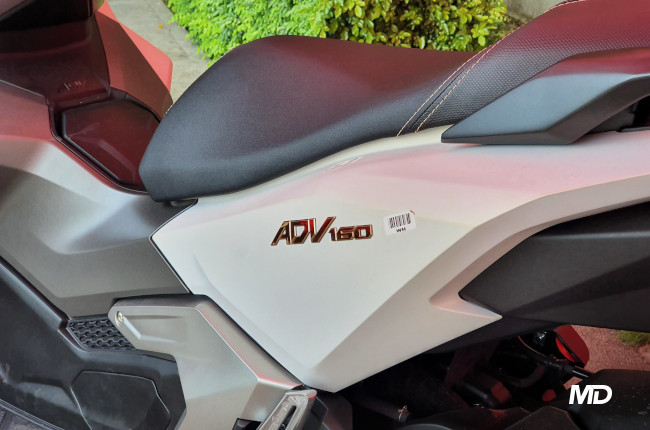 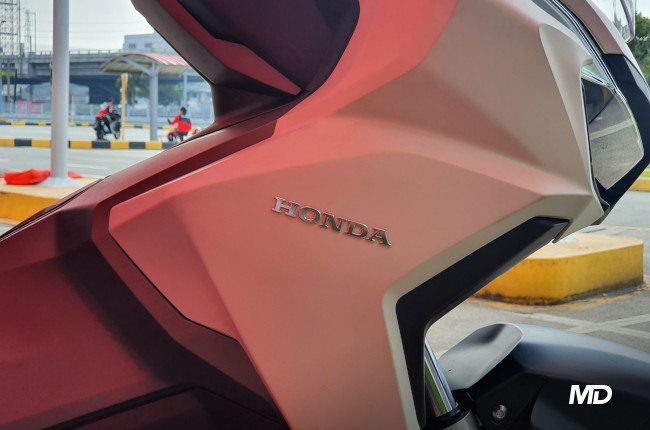 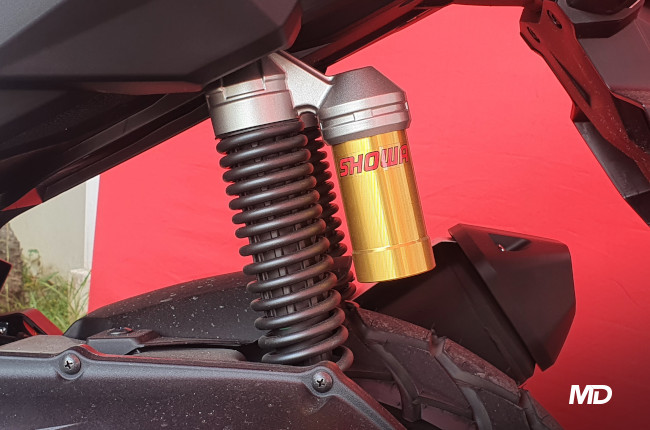 As for some of the details, Honda finished the handlebars and wheels in a bronze aluminum finish which is reminiscent of Honda’s big bike offerings (like the CB650R) in the country. On top of this, Honda also reported that the model features a bigger cargo space under the seat, from 28 liters in the old model to 30 liters in the new model. Other than that, we also get a slightly larger gas tank which is bigger by 100 ml. Also, Honda put on a bigger windshield. It's still adjustable, but it's now taller and able to keep more air off your chest at high speed. 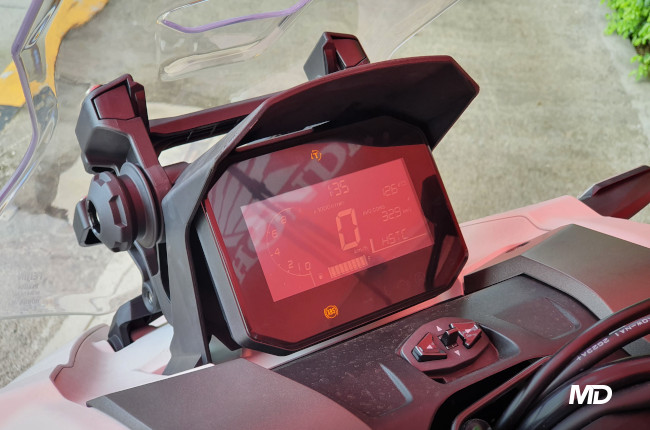 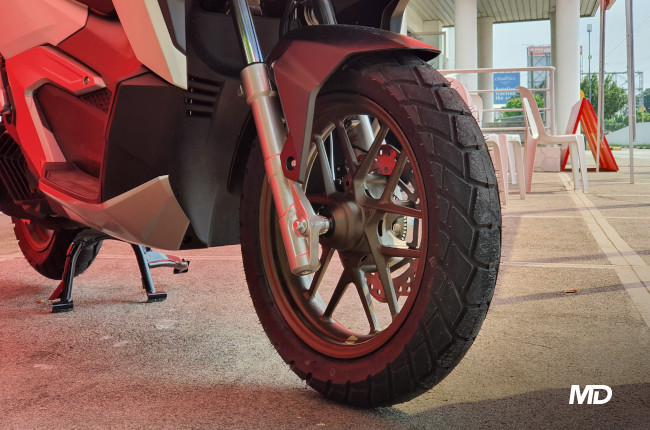 Aside from the expanded cargo space, Honda also equipped the ADV 160 with a USB type-A charging port which is located in a cubby hole with space for your phone. The ADV 160 also has returning features like its single-channel ABS system, the start-stop system, combi brakes, and keyless ignition. The newest and most notable feature is the Honda Selectable Torque Control (HSTC) system, which is a traction control system employed by Big H on its more powerful models like the CB650R. Now, it is found in the ADV 160, and it is also switchable in case you want to take this bike out for a ride on dirt. 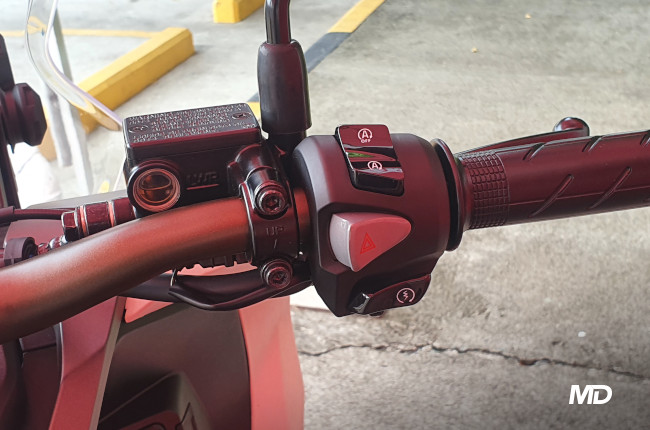 On top of that, there is also a new instrument cluster that doesn’t fare too well in ultra-bright environments, but it should be good enough if you need to check your speed, fuel, or even your efficiency at a glance. The panel is an LCD with a reverse polarity which means that its display is backed by a dark background. 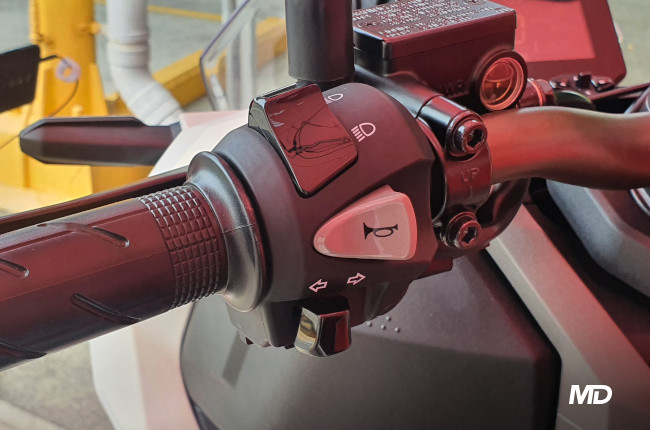 Then, of course, you get all LEDs in the front, rear, and turn indicators, and there is even a hazard switch in case you need to stop by the side of the road for an emergency. There is also an emergency stop signal function that activates at 70 km/h and it will flash your hazard lights in case you need to brake hard to warn whoever is behind you. 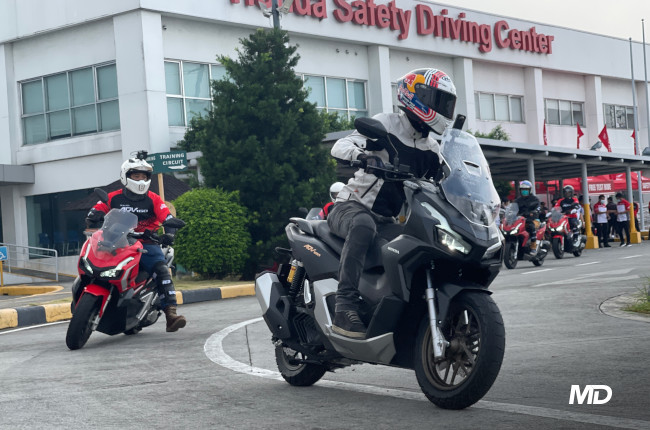 Just like the Click 160 and the Airblade 160, Honda Philippines called us out to its Safety Driving Center to test out the brand-new ADVs. Honda let us have a go with the ADV 150 to compare the two models, and the improvement is rather impressive. The 157cc liquid-cooled single-cylinder motor is punchier and delivers more torque. The throttle is also noticeably lighter to twist compared to the old model and the scooter gets off the line without much effort. In comparison, the ADV 150 took a little convincing in order to get it going from a stop, and that is no longer the case with the ADV 160. 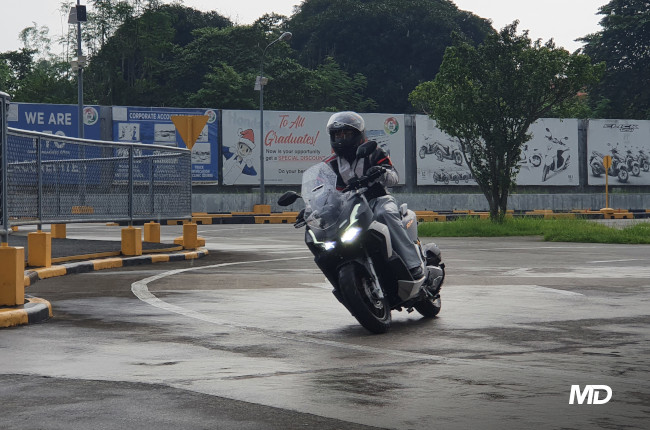 Cornering on the ADV 160 is quite easy as the handle allows you to leverage the front tire more. As a result, the bike turns in quickly, and executing tight turns on the scooter is effortless. We will note, however, that the outgoing ADV 150 was just as maneuverable as the current ADV with minute differences separating the two models. 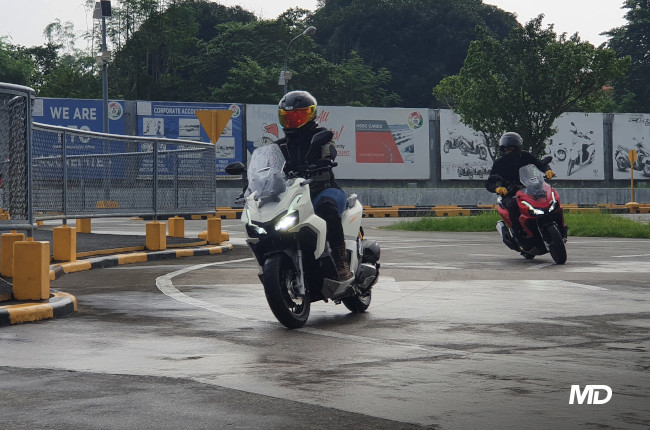 During our stints in the test ride, the ADV 160 was plenty comfortable with the long-travel Showa suspension soaking up whatever bumps Honda’s test track had at the time. We suspect that it will be an exceptional performer on roads like EDSA, but further testing is required. Apart from that, the brakes were also easy to modulate and control. Our test ride didn’t allow us to try the HSTC system out, but we believe that it’ll be a system that’s geared more toward safety. You can turn it off if you are going off-road with the ADV 160, but it’s there to keep you safe in case it rains or if there is a slick surface on the road. It’s definitely a great addition to the lineup of features for the ADV for added peace of mind. 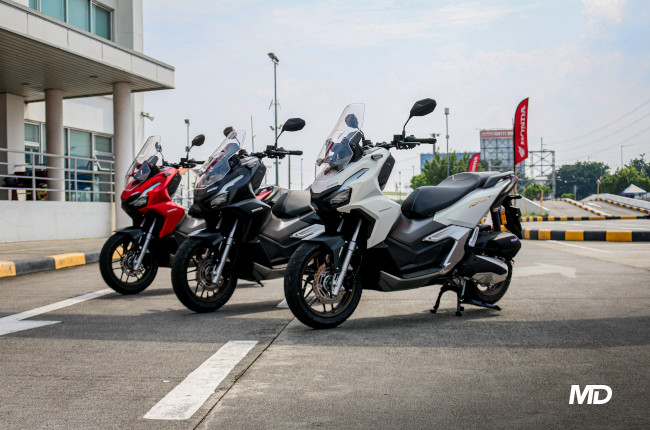 Initial impressions are great for the ADV 160, but then the price becomes a bit of an issue. At P164,900, the cost of this scoot is pretty steep considering that the previous model sold for about P150,000. We guess Honda struck gold back then with the ADV 150, and even some dealers reported that keeping stock of the scooters was next to impossible as they just kept flying off showroom floors non-stop. The moment a dealer got a shipment in, units would stay there for about a week before being scooped up by excited buyers.

That’s the power of the ADV 150 and that’s the legacy that will continue with the ADV 160. We understand how the current economic climate is affecting Honda’s bottom line. Heck, during the launch one of our colleagues asked how bad the supply chain issues that Honda faces in the global market were, and the reply there was not so good, to say the least. However, if we do compare it to its true rivals like the Aprilia SR GT, all of a sudden the ADV 160 seems like a bargain compared to the Piaggio scoot. The price is relatively steep, but it’s pretty much in a class of its own in the segment of mainstream scooters. There are a few models that have the specs with a name brand attached to them, and Honda’s definitely going to sell a lot of these scooters. Now, the question is, will you be falling in line for the ADV 160? If so, you better hop to it before the initial batch is all gone.