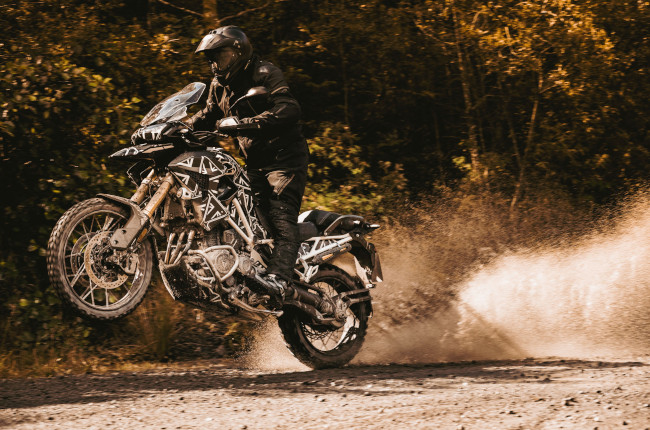 Triumph’s Tiger model range is getting bigger. Recently, we talked about the Triumph Tiger Sport 660, an affordable, entry-level option based on the Trident 660. Now, if you thought Triumph was just working on its beginner-friendly lineup, think again. Incidentally, the Hinckley company had also released teaser images of what it’s calling the Speed Triple RR—an even sportier version of its hyper naked bike.

Well, in the latest news to come out of Triumph HQ, it seems that they aren’t done revamping they’re 1,200cc model range, and are now working on the biggest, baddest Tiger yet, the Tiger 1200. Clearly, Triumph is setting out to do battle with the heavy-hitters of the ADV world, namely the Ducati Multistrada V4, BMW R 1250 GS, and the recently launched Harley-Davidson Pan America. Now, what exactly is it that we can expect from the Tiger 1200? Well, nothing is set in stone just yet, but we can surely speculate based on the images from Triumph.

Triumph is working on a new Tiger Sport 660 Now, while it’s more than likely that Triumph will be using the same engine as that of the Speed Triple RS, it isn’t clear just yet if the Tiger 1200 will produce the same 178 neck-breaking horsepower as that of its naked counterpart. For reference, this engine is a 1,160cc inline three-cylinder engine. Given this, it isn’t unlikely that Triumph will bestow the Tiger 1200 with different tuning to account for the bike’s dual-sport nature. Other than that, it’s clear to see that the Tiger 1200 is a more off-road-oriented machine, thanks to its long-travel suspension and wire-spoke wheels. The images clearly show, too, that this bike is equally at home off-road as it is on pavement.

Given the recent developments from Triumph, it’s evident that the company has been hard at work in revamping its model range to account for the exciting new offerings from its competitors. With bikes like the Trident 660 occupying the beginner-friendly segment, and heavy-hitters like the Speed Triple RS, and the soon-to-be Tiger 1200, there will soon be a Triumph motorcycle to suit the discerning tastes of the vast majority of motorcyclists out there.