Triumph sure loves its limited editions, having showcased the Gold Line family of models a few weeks back, and the Tiger 900 Bond Edition prior to that. Now, the British manufacturer is making yet another limited line of bikes, but this time based on the Triumph Thruxton RS, Triumph Street Twin, and Triumph Rocket 3. The Triumph Thruxton RS gets a special colorway on top of the already-viable package. The classic cafe racer comes with a massive 1,200cc parallel-twin engine, Ohlins suspension, and a hefty price tag for a standard model. As a limited edition, however, you can expect some badges and decals, as well as a look that is inspired by the Ton Up Boys of the 1950s and 60s cafe racer culture as well as Malcolm Uphill’s first 100-mile-per-hour lap around the Isle of Man TT. The tank is painted in a stunning Aegean Blue accented by black panels and a silver pinstripe. More special edition graphics adorn the front mudguard and the rear cowl both backed on white. Triumph has priced this the Thruxton RS Ton Up overseas at $17,300 USD. Add $800 USD if you want an Aegean Blue fairing from the catalog. The Rocket 3, meanwhile, wears its red paint job with confidence and boasts about its massive 221 Nm of torque on its gas tank with other specifications to match. Red Hopper is the name of the color used in this limited edition. The bike is also accented Sapphire Black and it carries a hefty $23,900 USD price tag for the R variant and $24,600 USD for the GT. 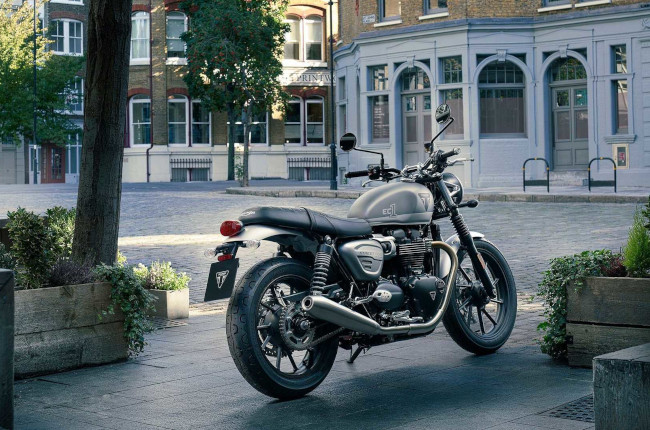 If you’re only willing to spend about half the amount that either the Thruxton or the Rocket3 costs, Triumph is also offering a limited edition Street Twin EC1. This bike pays homage to London’s East end and is the most understated of the trio. On it, you will find the postal code of the EC1 district, though that appears to be the loudest piece on the bike. Everything else is muted, as it is painted in Matt Aluminum Silver and Matt Silver Ice with some black-colored garnishes all throughout. Talk about subtle. The price is otherwise accessible overseas, coming in at just $10,350 USD.

These bikes are expected to hit showrooms by January 2022, though, Triumph Philippines haven’t made official announcements yet as to if they will be bringing the unit over locally.