At EICMA 2021, boutique Italian motorcycle manufacturer Bimota showcased its latest high-performance superbike. The KB4 looks like a futuristic sportbike, however, beneath its sharp, angular aesthetic, it shares the same engine as the Kawasaki Ninja 1000 SX. That’s right, this bike is being built in collaboration with Kawasaki, one of the biggest Japanese motorcycle manufacturers in the industry.

That being said, the new Bimota KB4 is expected to launch in the Japanese market very soon. We already knew quite a bit about this bike even before it was showcased at EICMA. However, Bimota revealed a lot about the bike’s premium underpinnings during the expo. For instance, we now know that the KB4 will come equipped with a suspension system decked out in Öhlins hardware. On top of that, we find range-topping anchors on this high-performance machine, too, consisting of Brembo Stylema components. 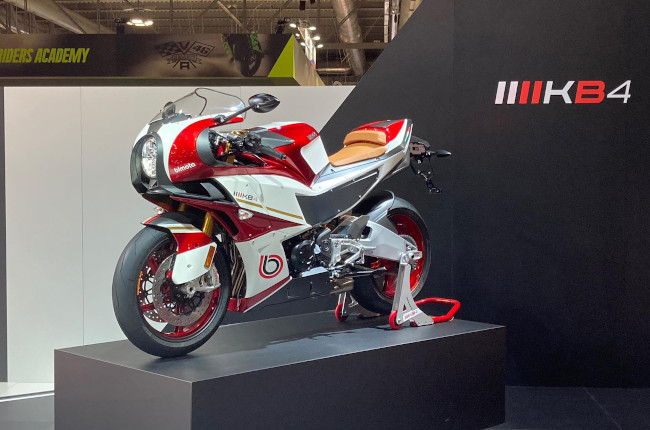 Apart from the top-of-the-line components found on the KB4, the bike features a unique platform that favors sharp handling. To do this, Bimota has relocated the bike’s radiator under the tail in order to give the bike a shorter wheelbase. We find that the front forks are a lot closer to the frame, translating to sharper, more instantaneous handling. This ultra sharp chassis further enhances the bike’s capability, considering that it’s powered by a rather potent power plant which churns out around 160 horsepower.

Now, the Bimota KB4 will hit the Japanese market next year, and will retail for JPY 4,378,000, which translates to around P1,900,000. This exclusive machine will be made available in Kawasaki Plaza locations across Japan. This high-end network of Kawasaki stores consists of showrooms, lifestyle stores, and service centers designed to give motorcycle enthusiasts a space to indulge in the latest and greatest to roll out of the iconic Japanese manufacturer. That said, don’t expect to see this bike enter the local market anytime soon. However, it won’t be surprising if this bike will be imported into the country in extremely limited quantities.