If there’s one thing that Arai helmets are known for, it’s their strict dedication to safety standards and relentless development of their craft to making innovative solutions to make their lids even safer every time. Arai’s helmets adhere to a continuous 75-degree radius shell construction for each of their helmets. They believe that this specification would disperse kinetic energy more effectively and would reduce rotational forces when the head would catch up with rough surfaces in the event of a crash. The design has one flaw though, it doesn’t bode well for track speeds. 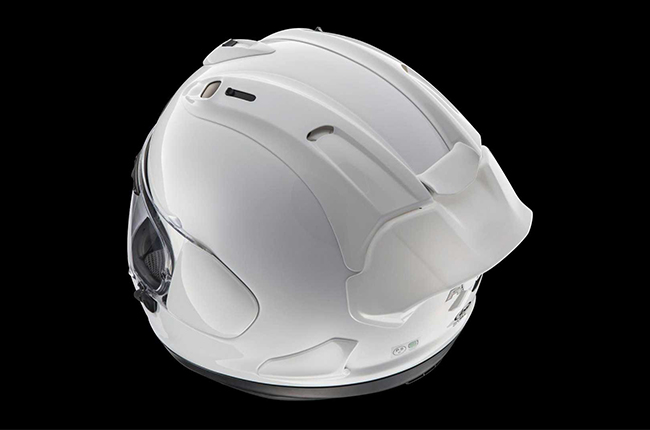 While there’s no doubt that each hand-built model that Arai makes and sold is properly certified for safety, MotoGP racers want a little more from their helmets to improve their track times. At high speeds of up to 350 km/h, MotoGP racers experience turbulent wind forces on the head which they have to fight off causing unnecessary fatigue over the course of the race which could not only cause them precious lap times but also puts them in a very dangerous situation.

Because of this, Arai collaborated with Japanese MotoGP Rider Taka Nakagami in developing and testing their aerodynamic lip attachment “spoilers” made for their RX-7X helmets, and Nakagami was very pleased with the results.

Since using this racing spoiler, my head shake has been significantly reduced, which allows me to focus more on the race. Also, the top speed is higher than before and the effect is great!
Taka Nakagami
MotoGP rider, LCR Honda

The “spoiler” attachment in effect would depart from the helmet’s 75-degree continuous shell radius construction and could easily break away from the helmet should a crash occur. But when the rider is pulling away on a long straight, helmet turbulence is greatly reduced which allows the rider to focus more on improving their lap times. While the new attachment is primarily designed with racers in mind, it shouldn’t stop any regular street riders sporting their CBR’s or Fireblades from adding the spoiler to their Arai own helmets. The Aerodynamic lip can easily be attached from the helmet’s rear air duct. It comes in 6 colors, white, black, glass white, glass black, flat black, and light smoke and is currently only available in Japan priced at ¥4400 (P2100) for light smoke and ¥5500 (P2600) for the colored variants.