Under the distributorship of Motostrada, CFMOTO Philippines debuted in the local motorcycle industry in 2018. Because of its economical yet impressive models, this Chinese company has earned a reputation for itself both domestically and abroad. These days, the brand's inventory includes a wide selection of bikes that appeal to riders of all types and budgets.

CFMOTO is a global company that designs, manufactures, and distributes high-quality and economical motorbikes, all-terrain vehicles, and side-by-side utility vehicles. It was founded in 1989 and has since produced about a hundred vehicle types and more than 50 engine variants for distribution to its 1,900 global partners. Let's look at the motorbike models available in the local market now so we can figure out which one is perfect for you. CFMOTO's smallest and most beginner-friendly motorbike is the ST Papio 125. But don't be fooled by its little stature. The ST Papio 125 is a sporty and zippy mini-bike that will give you a wonderful time on the saddle for only P78,000. A 125cc single-cylinder engine producing roughly 10 horsepower powers the CFMOTO ST Papio 125. It has contemporary and aggressive appearance, akin to CFMOTO's NK naked bike line, but in a more compact and approachable size.

Premium inverted telescopic forks, a digital LCD display, and LED lighting come standard on this bike, making it one of the best-equipped mini motorcycles on the market. The CFMOTO ST Papio 125 is equipped with front and rear hydraulic disc brakes, which keep the rider secure and confident. The CFMOTO 300SR is an entry-level sportbike with power and performance that well exceeds its price tag. The 300SR sportbike has a 292.4 cc single-cylinder engine that produces 28.6 horsepower at 8,750 RPM and 25.3 Nm of peak torque at 7,250 RPM. As for pricing, CFMOTO brings its A-game with the 300SR at P165,000—giving other mid-tier, small-displacement sportbikes a run for their money.

A 6-speed manual transmission transmits power to the wheels, and a 292 mm front disc and a 220 mm rear disc provide stopping force. LED headlights and taillights are standard, as is a 5-inch all-digital TFT display cluster that shows the fuel gauge, temperature gauge, speedometer, tachometer, trip meter, and odometer, as well as distinct layouts for sport and eco modes. This motorbike comes fitted with an ABS technology that allows for more regulated heavy braking. The CFMOTO 400 NK is an expressway-legal naked bike that was launched in the local market in 2018 with the goal of attracting motorcyclists who are looking for exhilarating rides at an affordable price tag. Retailing for just P219,800, the CFMOTO 400 NK is precisely that. The CFMOTO 400 NK is distinguished by its sharp and muscular design, LED headlamp and taillight, two-piece stepped seat, 17-inch wheels, and 17-liter fuel tank. A monochrome LCD instrument panel with a digital odometer, fuel gauge, and speedometer is also included. Additional rider information is provided via a tachometer and trip meter.

When it comes to performance, the 400 NK packs a  400cc liquid-cooled DOHC gasoline engine, which produces 41 horsepower and 34 Nm of peak torque. This potent engine is then mated to a 6-speed manual transmission. This naked bike has standard telescopic front suspension and a preload-adjustable monoshock from KYB, for improved rideability and agility. It has front and rear disc brakes, as well as an Anti-lock Braking System (ABS) and a pass switch, to ensure the rider's safety. 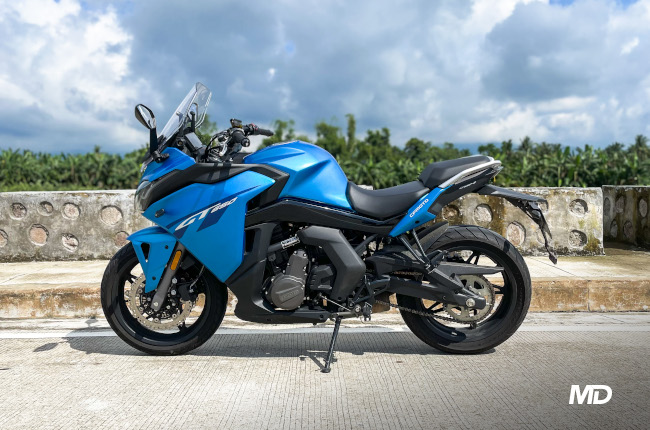 The CFMOTO 650 GT is a sport touring bike that boasts not only striking appearance but also cutting-edge technology and impressive performance. It's priced at P335,000 and comes in Concept Blue and Nebula Black hues. The numerous outstanding features that come with this sport tourer make it a wonderful choice for budget-focused big bike aficionados. There's all-LED lighting for improved visibility on the road, as well as an adjustable windscreen, USB charging connector, and 12-volt power outlet for electronics. The vivid 5-inch TFT display provides additional road information to motorcyclists. Touring and Sport are the two modes available to riders.

The KYB front suspension and updated rear damping equip the CFMOTO 650 GT with excellent rideability and maneuverability. This motorbike has an Anti-lock Braking System (ABS) and hydraulic brakes on both ends for added safety. A 649cc liquid-cooled Euro 4 parallel-twin engine with a maximum output of 62 horsepower and 59 Nm of torque powers this touring-ready bike. A 6-speed manual transmission is then linked to this powerplant. Last but not least, we have the CFMOTO 800MT. The CFMOTO 800MT is certainly a cut above the rest of the range, and it's undoubtedly CFMOTO's first step towards a greater adventure. On February 12, 2022, the CFMOTO 800MT was formally presented in the local market via an online event. It's currently offered in two variants for the Philippine market: Sport and Touring, with prices starting at P515,000 and P565,000, respectively.

With 95 horsepower and a 799cc parallel twin engine with electronic fuel injection, liquid cooling, and dual-overhead cams, it's by far the most powerful bike in CFMOTO's lineup. It also has KYB suspension components and cornering ABS as standard equipment. The CFMOTO 800MT is loaded with premium features. As a result, this bike comes complete with a full-color TFT screen, ride-by-wire throttle, several riding modes, and even a bidirectional quick-shifter.