For many big bike aficionados, owning a supersport can be quite a handful, especially if you ride your bike on a daily basis, or cover great distances while out touring. Luckily, the hyper naked segment is bustling with choices, and offers no shortage of high-performance models that are loaded with tech. When it comes to the 1,000cc Japanese naked bike class, it’s arguable that the Suzuki GSX-S1000 and Yamaha MT-10 are among the best.

The Suzuki GSX-S1000, recently updated for the 2022 model year, is better than ever, and now features a much-needed suite of updates. Meanwhile, the Yamaha MT-10, although launched in a new version abroad, continues to be the Tuning Fork Company’s biggest, most powerful Master of Torque yet. Today, let’s take a look at the finer details of these two bikes and see which one is best for you. 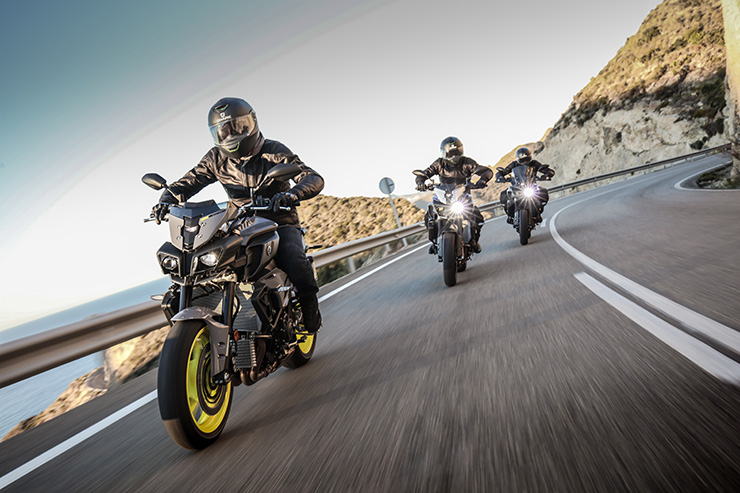 Of course, when talking about this class of motorcycles, performance is king. Both the Suzuki GSX-S1000 and Yamaha MT-10 share genes with their supersport siblings—the GSX-R1000 and YZF-R1 respectively. For starters, the Suzuki GSX-S1000 runs a 999cc inline-four engine with a traditional 180-degree crankshaft. This gives it the sound of an unmistakable superbike, and the linear power delivery associated with the inline-four engine. With 150 horsepower on tap, the GSX-S1000 is by no means a docile machine.

On the other hand, the Yamaha MT-10 cranks things up a bit in the performance game with a 999cc inline-four engine with a crossplane crankshaft. Just like the YZF-R1, the MT-10 benefits from an uneven firing order which gives the engine a lot more torque lower in the rev range. This translates to faster acceleration, a guttural exhaust note, and an incredible top-end rush. The MT-10 packs just a bit more peak power at 158 horsepower, but gobs of torque at 111 Nm. When it comes to features, the new-generation Suzuki GSX-S1000 pulls away from the latest iteration of the MT-10 we have locally available. Suzuki has blessed the 2022 GSX-S1000 with a full battery of electronic rider aids consisting of IMU powered gizmos like cornering ABS and traction control. It gets a fully digital display, allowing the rider to easily toggle between settings, and select from multiple riding modes with relative ease.

The MT-10, on the other hand, comes with the bare essentials when it comes to rider aids. It gets non-cornering-sensitive ABS, a rudimentary traction control system, and three riding modes. This results in a ride that’s a lot more raw and unhinged, with the MT-10 allowing you to do wheelies even when traction control is switched on. However, this means that the MT-10 could be less forgiving when things get a bit dicey. When it comes to pricing, it’s clear that the Suzuki GSX-S1000 touts better value for money overall. With a price tag of P710,000, it’s P90,000 cheaper than the MT-10, and boasts more modern features. That being said, what the outgoing Yamaha MT-10 lacks in technology, it makes up for in character. Considered by many to be one of the most soulful liter-class naked bikes out there, the MT-10 instantly turns heads thanks to its exhaust note and killer styling. For some, its P799,000 price tag is well worth it.