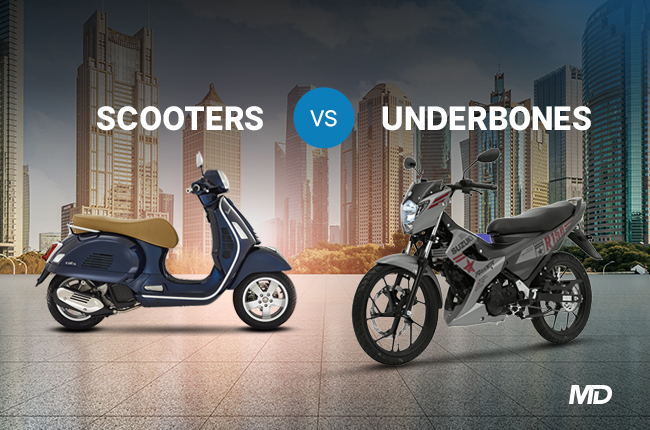 Scooters and underbones are two of the most commonly used forms of two-wheeled mobility in the Philippines. With ease of handling, ease of maintenance, and an affordable price point make it a common choice for people to get around. However, people might get scooters confused with underbones and it's easy to see why. They’re just about the same size with engines of about the same output. However, both are different in their own way even if they have quite a few similarities. 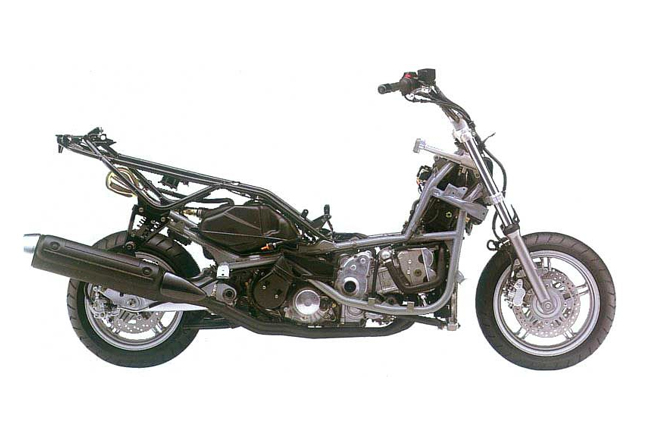 Scooters generally have step-through frames with their engines usually nestled underneath the seat near the rear wheel. Most scooters have their frame and chassis hiding underneath plastic panels to make it more aerodynamic and reduce drag when traveling at higher speeds. It is shaped in such a way to provide a flat floorboard on which you can rest your feet while traveling and paneling protects the rider’s legs from flying debris and air resistance. More often than not, this panel also provides some additional storage space with a small compartment for smaller items like a water bottle or your devices. Underbones, on the other hand, have step-over frames with its engine positioned between the rider’s feet. Unlike conventional motorcycles, underbones lack the frame’s backbone where a motorcycle’s tank usually sits. Instead of a step board that goes through to rest your feet, you still have to swing our leg over it in order to mount the bike. It still has the same footpegs you would find in standard motorcycles where your feet would be resting as you drive it down. Because of the way its frame and chassis are structured, it lacks the usual storage conveniences that scooters normally bring for your small items and favorite gadgets. The scooters and underbones are usually powered by small displacement single-cylinder engines ranging from 50 ccs to 150 ccs. However, some scooters are powered by even bigger engines ranging from 200 ccs to as much 745 ccs like the Honda X-ADV or the Yamaha TMAX SX 530 meant to give you more range and comfort in long-distance riding. These scooters are more commonly called as maxiscooters that are purposely built to go for longer distances. It was common for older scooters back then to use smaller 50 cc two-stroke engines like the old Yamaha Jog back in the early 90s but as emission standards started to become more stringent, manufacturers opted using bigger and cleaner four-stroke engines from 100 ccs and above. Because underbones generally have a larger wheel size than scooters, it makes it a little bit more tricky to mount bigger engines, although it’s hard to say that it can’t be done with some ingenuity and creativity. One of the most sought after underbones In the country is the Suzuki Raider 150 which is one of the most powerful underbones available in the market with a 147cc liquid-cooled, DOHC, four-valve, single-cylinder engine that churns out 15 hp and 12 Nm of torque and a full six-speed manual transmission.

Scooters now generally come with an automatic transmission or CVT giving you the comfort of twist and go traveling without having to worry about a clutch and shifting gears. However, it must be remembered that the earliest scooters made by Vespa had a gearbox system made possible by shift levers to change gears but nowadays, people would prefer the convenience of a twist-and-go automatic scooter.

Underbones, on the other hand, still make do with a semi-automatic gearbox where shifting gears can be done without the use of a clutch with its foot controls. There are a few underbones that also come with an automatic transmission like scooters and there are even some that feature fully manual 6-speed transmissions like the Honda RS150 and the Suzuki Raider R150. In developing countries where two-wheel mobility plays an important role for people to both get around and have their necessities delivered to them, scooters and underbones truly are the champions of quick and easy transportation. Thus, they come at prices that cater both for the budget-conscious, and for the extravagant. A decent budget scooter can come in the price range of P70,000 to P85,000 like the Honda Genio 100 and the Yamaha Mio Sporty 115. They’re lightweight, easy to maintain, and can get you to places with a twist-and-go throttle. For the more extravagant, a Vespa Sprint 150 can go for P205,000 to 215,000 depending on which variant you prefer. 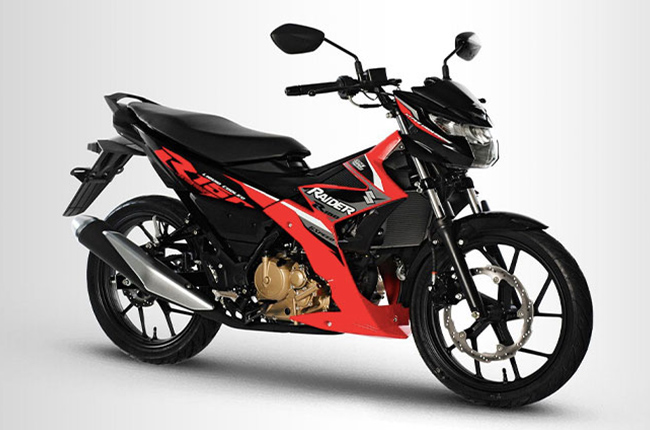 For underbones, a Yamaha Sight is ideal for the budget friendly to get you around with a budget of P59,900 to P62,900. The mighty Suzuki Raider 150, which offers a fully manual 6-speed transmission is priced at P96,900 and are only among the few options available