It goes without saying that the adventure bike segment is one of the most volatile, and fastest growing sub-segments in the motorcycle industry. With manufacturers continuously rolling out innovations and new technology geared specifically towards maximizing the performance and capabilities of their adventure bikes, we’ve begun to see an influx of high-tech adventure bikes, at even more affordable prices.

One of the most highly anticipated adventure bikes to roll out in the local market is the Yamaha Ténéré 700. Making use of Yamaha’s crucially acclaimed CP2 engine found in the MT-07, the Ténéré 700 offers a whole new level of performance and agility never before seen in the middleweight ADV segment. Here are a few reasons why this bike is worth considering as your next adventure tourer. The Yamaha Ténéré 700 is equipped with Yamaha’s CP2 parallel-twin engine. Now this mill is no ordinary parallel-twin. It comes with a 270-degree crossplane crankshaft, and a firing order which gives it the likeness of a V-twin engine in terms of sound and power delivery, and the compactness of a conventional parallel-twin motor. The CP2 boasts a displacement of 689cc, giving the Ténéré 700 a slight edge over its 650cc rivals in terms of outright performance. That said, this bike churns out a healthy 72 horsepower, making for a lively and exhilarating ride, both on and off the pavement. The Yamaha Ténéré 700 comes decked out with all the basic features which constitute a true blue adventure machine. While Yamaha has decided against fitting it with a slew of high-tech electronics in order to keep the price competitive, the Ténéré 700 still holds a strong case for itself, thanks to its premium adjustable suspension, adjustable windscreen, and switchable ABS on both front and rear ends. Speaking about the brakes, the Ténéré 700 gets beefy dual front discs, and a single rear disc brake. While suspension duties are handled by KYB units which offer 8.3 inches and 7.9 inches of suspension travel front and rear, respectively. 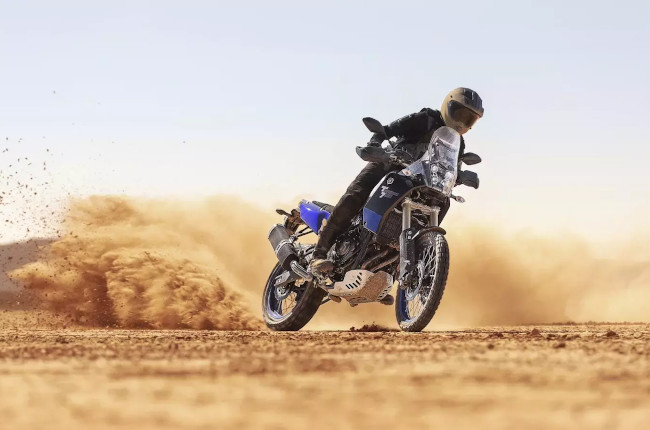 For decades, Yamaha has proven itself as a reliable, dependable, and consistent motorcycle manufacturer, producing machines which have stood the test of time. The Ténéré 700 is no different. It’s clear to see that Yamaha has engineered this bike to last, and has truly designed it as a purpose-built adventurer. With solid underpinnings derived from the company’s most popular midsize naked streetfighter, the MT-07, the Ténéré 700 clearly seeks to raise the bar in terms of overall performance when it comes to the middleweight ADV segment. The Yamaha Ténéré 700 arguably makes for one of the most versatile big bikes currently available in the market today. Combining fun, practicality, and outright performance, this bike is sure to put a smile on your face whether you’re commuting to work, riding out of town on the highway, or shredding it on some gnarly off-road terrain. To make things even better, a massive aftermarket already exists for this bike, with tons of bolt-on luggage options, ergonomic mods, and accessories already available in the market. Now, as far as price is concerned, the Ténéré 700 sits on the top of the bracket when it comes to middleweight adventurers. Bested only by the KTM 790 Adventure, which will set you back P699,000, the Ténéré 700 is slightly more affordable at P619,000. For the price, however, you get stellar performance out of the 689cc CP2 motor, premium suspension and braking hardware which boast full adjustability, and a bulletproof chassis which is not only versatile and capable both on and off-road, but has been designed to stand the test of time.