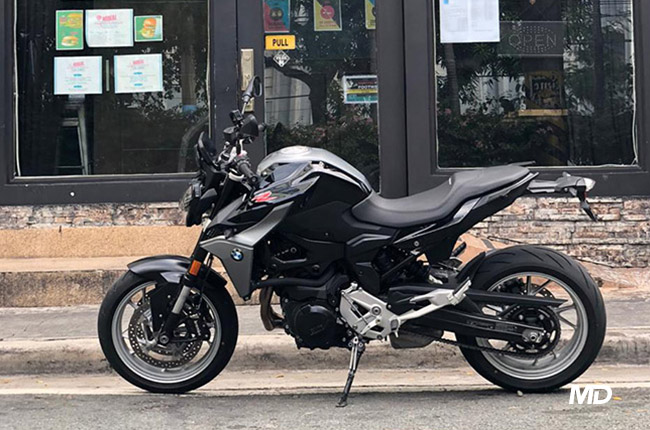 Ever since BMW introduced the F 900 R as its contender to the growing middleweight segment with its aggressive naked styling built for motorcycle purists, yet still offering a lot of technology and features. After boring up its engine derived from the F 800 GS, the result is a bump up in power on a machine that’s still versatile enough to take around town, quick trips out of the city, or even as your track day machine. It will surely bring you loads of fun. If you’re still not convinced about it, here are five things we like about the new BMW F 900 R. The F 900 R’s design has an aggressive roadster styling, yet its characteristics as a naked bike still make it more comfortable to ride than sportbikes. It has modern styling cues with a lot of sharp angular lines seen throughout its bodywork. The side panels connected to its radiator that flow to its tank are shaped like a section of a shuriken. It makes you forget that this bike actually bears a German badge. The front has an angular headlight with rounded corners that is fitting for the roadster styling of the F 900 R. From behind, its tail section that houses its brake light and signal lights doesn’t look like it’s extending out from the rear seat. Yet, the result is a design that’s unequivocally modern with not a lot of changes you’d want to make just to make it look even better — because it already does. Most new motorcycles are starting to use full-color TFT displays for its instrument panel, BMW’s TFT display for the F 900 R is something else. It’s highly visible in all sorts of lighting conditions. It gives all your needed information which includes its riding modes, a trip computer, fuel gauge, and gear indicator. The number indicators of its rev counter increase in size as the RPM increases with the twist of the throttle. The display itself could be mistaken for an iPad with the clarity of its resolution. In addition, it’s user interface can easily be accessed with the handlebar controls located on the left side of the handlebar.

With a bored-up 895 cc parallel-twin engine that’s capable of churning out 105hp and 92 Nm of torque, it growls with a deep resonating sound you would normally only hear in V-Twin engines. The result is a deep exhaust note from the low and mid-range that grows a little louder as you climb even higher on the rev range. The result is mechanical music to your ears you could compare to the deep tone of Ian Curtis’s voice of his songs from Joy Division. Music that you would like to hear again and again making it hard for you to stop riding the F 900 R. The responsiveness of its foot controls gives you one of the smoothest actuation you can feel from a gearbox. Shifting to the next gear cocks like a gun. Its gearbox doesn’t give the rider the difficulty of finding the neutral position even if you’re doing it for the first time. Chances are, you’ll easily find it, without any crunchy feel and unintended gear shifting. This makes taking the F 900 R around traffic situations much more bearable than most motorcycles of its same size and segment.

You get the BMW prestige with a not so BMW price. Most people would be thrown off by the prestige of the BMW badge alone thinking that it would be a far reach for most. However, with a starting price of P655,000 for the Standard trim, it doesn’t put the bike so far from its Japanese counterparts, which is exactly what BMW is trying to do with the F 900 R. It is priced in such a way that it could give most Japanese naked streetfighters a run for their money. You get German performance and engineering that’s loaded with tech and features that’s all packaged in a price point that wouldn’t be such a far reach for most whether or not you’re a seasoned rider or a newcomer in the world of motorcycles.