From Vespa’s scooter lineup, the GTS 300 Super Sport would be the pick for people looking for the elegance and refinement that an Italian scooter can give you. At the same time, when you look down to its details, little touches alluding to sportiness thanks to the little black and red stripes that run along with its side panels, wheels, and front fender. Add that eye-catching matte gray paint finish and you have a scooter that’s quite a head-turner. However, it’s also got enough power to boot. We give you five more reasons why the Vespa GTS 300 should be on your list for your next scooter purchase. Vespa scooters have already come a long way since the very first “wasp” was introduced by Enrico Piaggio shortly after the Second World War. Yet, even today, it still stuck to its signature design cues with design influences derived from the golden age of Aviation. The same holds with the Vespa GTS 300. It still has the same classic signature Vespa look with its all-steel monocoque construction and single-sided front suspension, but with all the advancements from today’s modern technologies. It is a blend of old and new, and almost every Vespa that rolls out of their factories are destined to become a future classic.

It’s the most powerful Vespa The GTS 300 has one of the most powerful engines Vespa has ever made for any of its scooters. It is powered by a 278cc single-cylinder, 4 stroke engine is capable of churning out about 24 hp and 22 Nm of torque mated to a CVT. In other words, it comes with a powertrain that’s seen in most maxiscooters from other motorcycle brands. For running around the city, it has enough power to get you up to speed with other bigger vehicles. Yet, the power is unassuming since it still comes in an elegant Vespa scooter package which brings us to our next point. The Vespa GTS 300 Super Sport may have some power normally found in other maxiscooters, yet it maintains almost the same dimensions as the rest of its scooter lineup. This coupled with its dry weight of 158 kg makes it extremely maneuverable even in the tightest situations of hellish Metro Manila traffic. You can easily squeeze yourself in between cars and split lanes to get yourself ahead of everyone else. It has a small enough turning radius to make those quick U-turns to take a different route to your destination, or bail from the traffic altogether. At the same time, its disc brakes in the front and rear coupled with ABS have more than enough bite to tame all that engine power. Nowadays, a scooter’s panels are built around a steel frame where the engine and other mechanical components sit. Its plastic panels would be attached to it to conceal most of its moving parts. That doesn’t apply with a Vespa. Ever since the very first Vespa rolled out of its Pontedera factory they were always built with a single piece monocoque steel body, instead of using a tubular steel frame that other scooters normally use. Rather than having panels attached around it, its engine would be sitting within its monocoque body. For a Vespa, the panels themselves are part of its frame, and the same holds with the GTS 300. 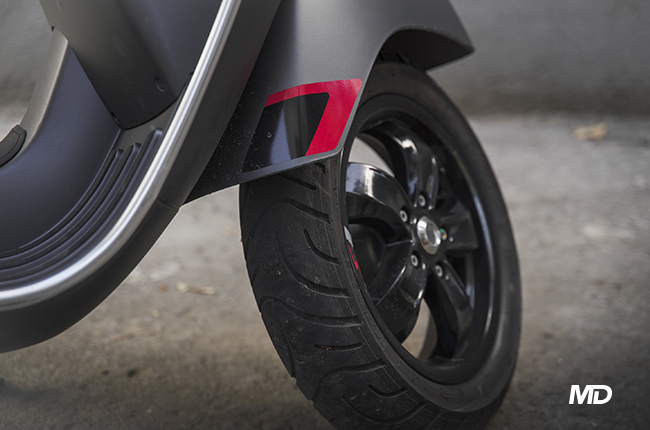 True to its aeronautical roots set forth by Vespa’s very first chief designer, Corradino D’ Ascanio, the GTS 300 Super Sport has a single-sided front suspension to keep bumps at bay and make sure the tires are always on the road. It is engineered to work the same way as an aircraft’s landing gear. All of its mechanical and moving parts are nestled on the left side of the wheels with its disc brake, and suspension crammed into place. This also makes it convenient to dismantle the front wheels should you get a puncture in your tire. Today it still forms part of its signature and iconic look for so many decades since the very first MP5 Vespa prototype was presented to Enrico Piaggio.