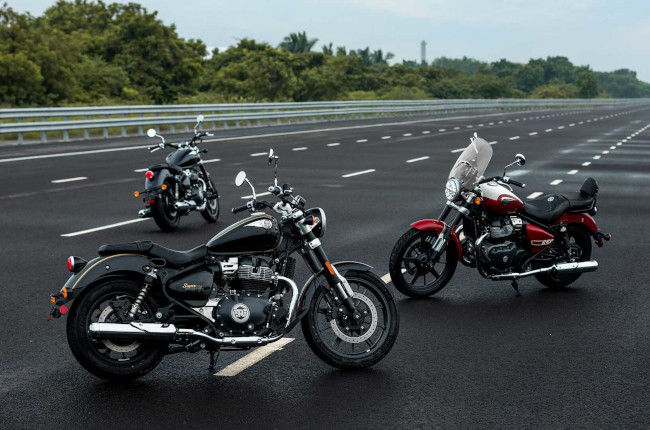 At EICMA 2022, Royal Enfield wowed spectators with a diverse lineup of new models, the majority of which were built on the Indian manufacturer's current platforms. The Super Meteor, a much awaited cruiser built on the wildly popular 650 chassis, was one of the motorcycles that stole the show at the Enfield display.

The Super Meteor, like other Royal Enfield motorcycles, will debut in the Indian market and borrow stylistic ideas from its smaller sibling, the Meteor 350.  Since Royal Enfield is renowned for being very quick when it comes to the go-to-market of its new models, it should come as no surprise that the Super Meteor is set to enter the Indian market as early as January 2023. The business has allowed pre-orders for the Super Meteor ahead of the bike's debut and revealed all the features and colors to heighten interest. Although the official list price has not yet been made public, Indian automotive journals generally agree that the bike would retail for roughly Rs 350,000, or around P240,000. Expect a sharp increase in price if and when the bike enters the Philippine market. Nevertheless , owing to its dominant position in the Indian industry, Royal Enfield has long been recognized as the leading manufacturer overall.

Enfield devotees will be extremely familiar with the Super Meteor's performance. It has the same 648cc parallel-twin engine as the Interceptor and Continental, which produces a respectable 46 hp and 36.4 ft-lbs of torque. The Super Meteor will face tough competition from the Benelli 502C, Honda Rebel 500, and potentially the Kawasaki Vulcan S once it debuts in the global market.

It's clear to see that the Super Meteor is ready for customization right off the showroom floor. In fact, it's expected that Royal Enfield will offer a ton of extra accessories for the bike around the same time that it actually goes on sale. The Super Meteor will come in two variants—Standard and Tourer—and will be available in a total of seven colors. Five colorways—Astral Black, Astral Green, Astral Blue, Interstellar Green, and Interstellar Gray—will be available for the Standard version. The better-equipped Tourer will be available in Celestial Red and Celestial Blue.