Big bikes are certainly cool and carry a lot of wow factor, however, it can’t be denied that a big bike isn’t always the answer. Indeed, commuter bikes, more specifically, underbone motorcycles, continue to be the kings of Philippine streets, as well as the bustling metropolises of the majority of Asian countries. That said, it’s clear as day as to why this is the case, as underbone motorcycles are both affordable to buy and maintain, while offering the practicality most commuters need on a daily basis.

In the local market, the underbine scene has long been dominated by the Suzuki Raider R150. However, Yamaha’s Sniper 155 has long been a strong contender, and has the edge when it comes to styling and technology. Today, let’s take a closer look at these two popular underbone models, and put them head-to-head in this spec-sheet brawl. From a performance standpoint, it’s important to note that these bikes produce rather small power figures, so even the slightest variation in horsepower can translate to real world differences. For starters, The R150 Fi, according to Suzuki Philippines, is the most potent 150cc motorbike in the country. The power output is said to be a result of innovations that the company created for its MotoGP-contesting bikes. A 150cc liquid-cooled, DOHC, four-valve, one-cylinder engine with 18 horsepower and 14 Nm of torque powers this commuter bike. It uses a six-speed manual transmission to send power to the back wheel.

A 155cc, 4-stroke, liquid-cooled, SOHC, 4-valve engine that powers the Yamaha Sniper 155 generates 17.8 horsepower and 14.4 Nm of torque. After that, a 6-speed manual gearbox transfers the power to the rear wheel. Incidentally, the engine found in the Sniper 155 is a variation of the engine also found in the Yamaha YZF-R15, albeit tuned differently to better suit commuting and the cargo-hauling capabilities essential for an underbone commuter. As such, you can be assured of its longevity, reliability, and fuel-efficiency. 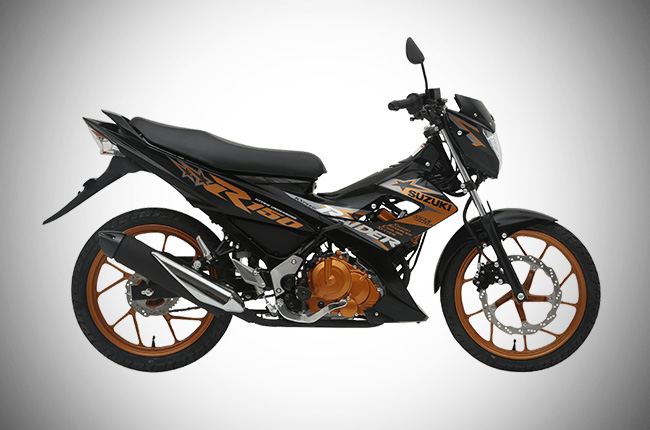 On the feature front, the Suzuki Raider R150 Fi has modernized itself since its inception several years ago. In its current generation, this bike features an LED headlight to ensure excellent visibility on the road, a fully digital instrument panel, as well as ample storage space underneath the seat. It also gets front and rear disc brakes, as well as a preload-adjustable rear monoshock.

Meanwhile, Yamaha’s Sniper 155 stacks up nicely with a slew of premium features, as well.This commuter does come with a respectable number of amenities, including the essentials like an LED headlight, tail lamp, and indicator lights for that extra touch of design and better visibility, especially at night. A fully digital instrument panel now also comes standard with the revised Yamaha Sniper 155. Due to its consistently high sales statistics over the years, the Japanese manufacturer has dubbed the Suzuki Raider R150 Fi the "underbone king" of the Philippine market. It's simple to understand why this underbone motorbike is such a successful seller given its reasonable price of P110,700.

The Yamaha Sniper 155, on the other hand, has a slightly more contemporary appearance that pays homage to Yamaha's racing history. It consequently costs a little bit more money. This commuter bike is offered in two versions locally: Standard costs P121,200, and R costs P127,700. There are several color variations available for the Sniper 155, including Matt Green, Racing Blue, Yellow Hornet, and Black Raven.