It’s been a while since we’ve seen a true, performance-oriented sportbike from Triumph. With the Daytona now long gone from the Hinckley company’s model range, it’s in the naked bike segment that Triumph has really begun flexing its muscles. With entrants in the entry-level segment, middleweight class, and hyper-naked category with the Trident 660, Street Triple 765, and Speed Triple 1200 respectively, the company has raised the bar even higher with its newest creation.

5 things we love about the Moto Guzzi V85 TT As far as performance goes, the Triumph Speed Triple 1200 RR packs one of the strongest punches in the street bike segment. Equipped with a 1,160cc inline three-cylinder engine, it pumps out a neck-snapping 180 horsepower and 92.2 ft-lbs of torque. Just like its naked counterpart, the Speed Triple 1200 RS, the RR’s engine gets modern-day amenities such as liquid-cooling, dual overhead cams, and a 12-valve cylinder head. This performance is further optimized by a sophisticated ​​multipoint sequential electronic fuel injection system, complete with electronic throttle control.

Judging from all the hype that Triumph has been building surrounding this bike, it’s clear to see that it’s perfectly at home on the track. With its aggressive riding position, windscreen, and rearward-set foot pegs, it’s clear that comfort has taken a back seat in favor of aggressive style, and of course, race-ready performance.

Is an airbag vest worth it? Complementing the bike’s game-changing performance, Triumph’s engineers have equipped the Speed Triple 1200 RR with a slew of ultra-high-tech features. For starters, it gets semi-active suspension from Ohlins. This premium suspension set up offers electronic adjustment of both rebound damping and spring compression, allowing the rider to fine tune to suspension according to their specific needs, be it on the street or the track.

Other high-tech farkles include a built-in up and down quckshifter making gear shifts lighting-fast. A six-axis inertial measurement unit (IMU) keeps tabs on other electronic rider aids such as cornering ABS, traction control, and even front wheel lift control. For added confidence on the street, the Speed Triple 1200 RR gets full LED lighting and a keyless ignition for seamless activation. The cherry atop this technological masterpiece is the fully configurable 5-inch TFT display complete with Bluetooth connectivity, GoPro integration, turn-by-turn navigation, and even a built-in lap timer. 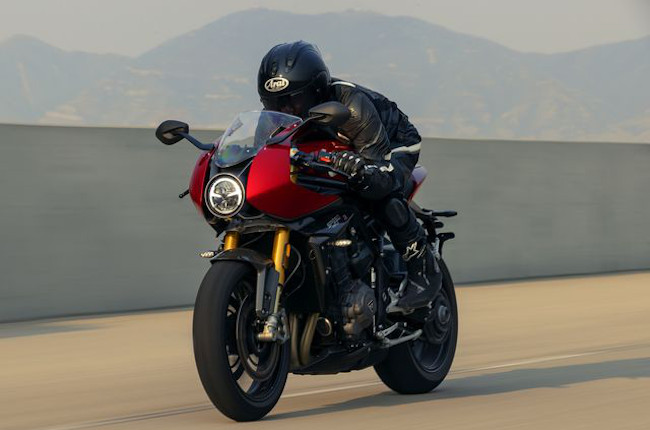 Of course, the Triumph Speed Triple 1200 RR isn’t a dedicated track machine. Instead, it’s a bike that has been designed for use on the street, but one that’s meant to deliver an utmost riding experience in all situations—including when you’re just admiring it in your garage. That said, Triumph has not skimped on beautiful styling cues on this bike. It makes use of a seamless blend of carbon-fiber components, subtle branding, and meticulously sculpted bodywork. All of these elements wrap up a package that’s thoroughly visually striking—evoking sheer performance and retro-inspired styling.