If you go to a motorcycle store, you could be overwhelmed by the number of choices you can have when buying a pair of boots. The truth of the matter is, it’s just like buying a pair of shoes, you must dress for the occasion. The boots you get should be specific for the intended purpose you plan to use them for. The materials used for each type of boot can be made from different types of materials including mesh, leather, textile, rubber, and plastic. In addition, they would also vary with comfort and protection. Being overdressed to a party is not a big deal, but being overdressed when riding, especially if you don’t need it, will have its own inconveniences attached. Though, underdressing for any occasion, especially motorcycle riding, is something that we do not recommend doing. To give you a better picture, here are the different types of motorcycle boots according to its intended use whether you ride a scooter, dirt bike, naked bike, or sportbike.

Also, if you notice, the more functional or ‘hardcore’ a boot gets, the less likely you are to see it in casual use. That’s usually the tradeoff. Most of the time, more protection means that it is possibly harder to pull off a casual look with boots that look like greaves with armor plating – but don’t let us stop you. 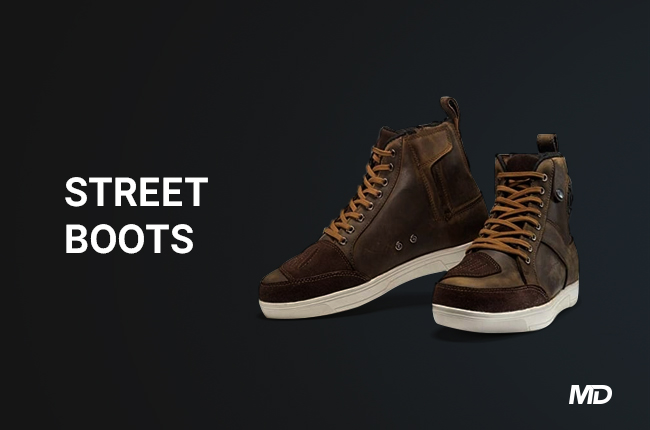 Street or casual boots are among the most versatile pairs on this list and provide the most comfort and use cases. Unlike regular sneakers or shoes, motorcycle street boots offer more protection by using special soles, armor plating, and abrasion-resistant materials with its construction. Yet, they still provide enough comfort to use for everyday wear walking around the office after getting off of your bike from the commute. Some boots can even mesh well with your outfits provided you coordinate your outfits.

However, they don’t provide as much coverage as the other types of boots like touring or racing boots. They normally do not rise above the ankle, so we don’t recommend them for hardcore rides. They normally also make use of laces which could also have the danger of getting caught up in moving parts. However, they tend to be much more affordable than all the other boots from this list because it uses less material than all the other boots. That makes up for its versatility, comfort, and just the right amount of protection for the more everyday casual riders that use their motorcycles for their daily commute, and with the right pair, you won’t need to worry about bringing another pair of footwear once you get to your destination. 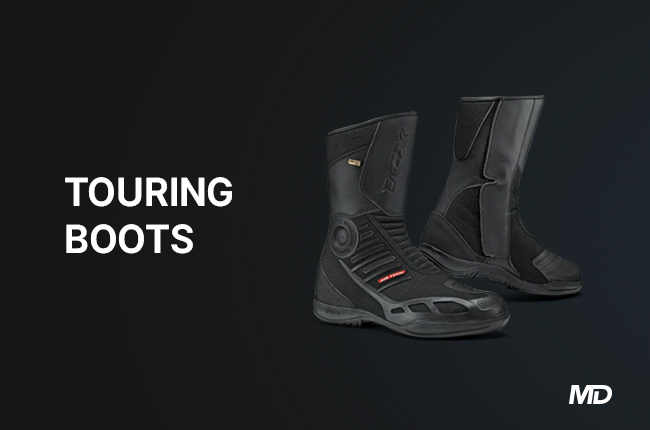 Touring Boots are made for riders who tend to spend a lot of time mounted on a motorcycle’s saddle and on the road. They normally rise up with from mid to full-height that reaches your calves, are very protective, and designed for foot controls that are positioned in a more neutral stance. It has a perfect blend of comfort and protection and tends to be heavier than street or casual boots. The higher cut also allows for more rigidity and support, but not too much like a motocross pair of stompers, more on that later.

While they do not offer torsional bracing as much as racing boots or dirt boots, they’re flexible enough for some on-foot travel while at the same time offering all-day comfort on the saddle. They’re also usually built for all kinds of crazy weather that riders encounter a lot during those long-distance touring rides. At the same time, touring boots are normally more expensive and offers a reasonable amount of variety when it comes to style, but they are functional which is always a recommendable trait. Just like touring boots, adventure boots are also made for riders who spend a lot of time on the saddle. However, adventure riders split their time between riding on the road, and off-road. Thus, adventure boots combine the superior protection that dirt boots normally give, plus the comfort of touring boots. They’re designed to withstand all sorts of weather conditions riders would encounter from those long rides.

Dirt riding requires stiffer boots to protect your ankles from popping when you put your foot down which happens a lot when you corner with dirt bikes. Pavement riding, on the other hand, needs some flexibility and lightness. Adventure boots find just the right balance between pavement and dirt riding which its users would normally encounter on adventure rides. Dirt bike boots are made for people who primarily ride off-road more than anything else. As mentioned earlier, off-road riders tend to put their feet down a lot like a technical skill for cornering with speed. Because of this, the construction of dirt bike boots has to be rigid enough, built with hard soles to protect your ankles from impact, but also tends to limit the range of your motion. Thus, don’t expect a dirt bike or motocross boots to be the best for walking around.

Dirt bike boots only come in a full-height option, have a very heavy construction, are stiff, rigid, yet well ventilated, and can be easily distinguished by the presence of a lot of buckles to keep its protective armor panels in place. It maximizes protection over your feet and ankles above everything else and at the same time, it has all sorts of graphics and colors out in the market. Just like motocross boots, sport and racing boots offer protection to your feet and ankles above anything else. Sport and racing boots mainly focus on performance and protection with technology derived from lessons learned directly from the MotoGP races. They’re much lighter than motocross boots, and yet still maintain a certain level of stiffness tailored for track racing. It still allows just the right amount of flexibility to feel the tactile feedback when you’re working on your bike’s foot controls. Its construction is designed for the more rear set foot-controls which most sport bikes have so pads and protection will be placed in all the right areas.

Its construction provides the most abrasion resistance, impact dissipation, and rigid exoskeletal construction with replaceable armor panels allowing you to swap them out once worn out. Toe sliders are present on each foot riders on the track tend to lean into the corners at high speeds on which elbow, knee, and toe scrapings are not an unusual occurrence.